Please click on the below link to read this complete article in Hindi:
यार्न पैरामीटर्स या यार्न स्पेसिफिकेशन्स
YARN PARAMETERS:

The different parameters of yarn are given below:

In this system, the weight of the yarn remains constant and the length of the yarn varies according to the fineness of the yarn. Ne, Nm, lea are some examples of the indirect system. As the count of yarn increases, the yarn becomes finer.

If these yarn counts are in the direct system
then the resultant count will be:

Before placing the purchase order of any yarn, the customer should ask to send samples of yarn from two or more yarn suppliers. The yarn count test should be conducted in-house or outside the lab. Now you can make a comparison of yarn count among these samples of yarn. The yarn showing minimum yarn count variation should be selected for purchasing.
Now ask your supplier for the test report and see the Count CV% (coefficient of variation percentage). Minimum count CV% means better the yarn. Less than 3 count CV% is considered as a good result.
If there is much count variation in the yarn, it will be reflected in the fabric, the GSM of fabric may vary due to count variation. The areas of thick and thin fabric may result in the same piece of fabric. Lines of the thick end and thick pick may appear continuously in the fabric. The purchaser should be fully aware of this parameter.

The appearance of the yarn:

Tensile strength of the yarn:

This method is used in spun yarn only. Bundle strength does not give the correct value of yarn strength but it helps to compare two yarns of the same count. If we have to select the best yarn between two same counts of yarn, bundle strength is very useful.
A skein or lea of 120 yards (having 80 wraps of 1.5 yards) is prepared. It is broken with the help of a vertical lea strength tester and breaking force (tensile strength) is recorded in the pound, Kg, or Newton. Now count strength product of yarn is calculated as follows:
C.S.P= Count of yarn (Ne) x tensile strength (breaking strength of lea in a pound)
The yarn having more CSP is better than the yarn of lower CSP for the same count of yarn.

Elongation percentage at the time of tensile strength testing is also recorded. The elongation of yarn plays a very important role during weaving. If the yarn has no elongation, it is almost impossible to weave the fabric with this yarn.
The difference between stretched length at the break after applying force to an original length of yarn expressed as a term of percentage is called elongation % at break. If a yarn has a higher elongation at break means it has a better ability to bear the tension and jerk during weaving and other processes.

The length of yarn in kilo-meters” at which yarn begin to break due to its own weight when the yarn is hung vertically. It is equivalent to breaking load in grams/ tex. The yarn that has a value of RKM more than 20 is considered the best yarn.

The degree of hairiness tells the number of fibres protruding from the base of yarn. The hairiness H measurement unit of the Uster Tester determines the hairiness of approximately 1centimetre length of yarn.
This value is specified as an average value of hairiness over the total test length. If the yarn has a 2.5 hairiness value, 2.5 centimetres fibres desist from the yarn at a yarn length of 1 centimetre of yarn. If the yarn has a low hairiness value, it means it has lower chances of the generation of pilling. It will give a better performance during weaving and other processes. 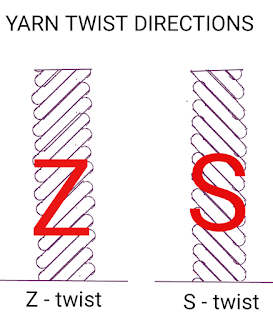 The clockwise twist of yarn is called s-twist. The inclination of fibres in yarn looks similar to the middle part of the English letter “S”.

The anticlockwise twist of yarn is called z-twist. The inclination of fibres in the yarn looks similar to the middle part of the English letter Z.

Yarn evenness is a characteristic of yarn that denotes the level of variation in yarn linear density or mass per unit length of yarn. Evenness of yarn refers to the yarn irregularities in respect of yarn count along its length. The evenness of staple spun yarn is judged because staple spun yarn has count variation due to many reasons. The continuous filament yarn has no variation in yarn count so that evenness is not an issue for continuous yarns. The evenness of yarn is a very important quality aspect of yarn because it directly affects the fabric to be woven. Count irregularities directly appear on the fabric surface. A yarn having poor evenness has more thick and thin places along the yarn length, while an even yarn has little variation in the count or linear density along the yarn length. Since twist tends to accumulate in the thin places in the yarn so that irregularity in yarn linear density also causes variations in twist along the yarn length. This twist variation also affects the yarn diameter. Following parameters are observed during testing of evenness of yarn:
·       Uster %
·       Neps
·       Thick places
·       Thin places
·       Total imperfection
Uster %:

This is a measure of the variation of linear density or count of yarn in terms of percentage. It shows the total imperfections in percentage. If a yarn has lower Uster %. It means this yarn has a lower imperfection. The quality of this yarn will be better.

A very short thick place in the yarn (a small yarn defect containing a length of 2milimeter, the diameter of 3 times or more at a standard-setting of 200%) is called nep. It is made of unopened fibres, broken seed coated by fibres, or a trash particle. It can be + 200% thicker than the average diameter of the yarn. The increase for neps is calculated to a reference length of 1mm. They can be a bunch of entangled fibres commonly not bigger than pinball heads.

A place in the yarn having a yarn diameter in excess of +50% of the average yarn diameter and the length 8-12 mili-meters is considered as the thick place. This yarn defect affects fabric appearance.
Thin place:

Total Imperfections:
Imperfections is the total of thin, thick places and neps in 1000 meters of yarn. The yarn having total imperfection less than 100 is considered as the good quality of yarn.

A yarn user should always be aware of the above yarn parameter. Before purchasing any yarn, the sample should be tested in-house or outside the lab. Users should always ask to send the yarn sample to two or more yarn supplies along with a detailed yarn test report and a comparison chart should be made before purchasing the yarn. Now the user can select the best option in available samples and can place his order.

Please watch the below video in Hindi about yarn parameters or yarn specification:

Roving frame or simplex process and it's objectives

Comparison between weaving and knitting process

TYPES OF YARN, CLASSIFICATION OF YARN