The ramie is a natural fibre. It is mainly composed of cellulose. It is a bast fibre obtained from stem of the ramie plant. The ramie plant is normally harvested two to three times in a year.

The ramie fibre requires chemical processing to de-gum the fibre. The ramie fibre is one of the strongest natural fibre. It poses even greater strength wet conditions. The ramie fibre is known specially for its ability to hold shape, reduce wrinkwrinkle character. It provides silk like lustre to the fabric. It has slightly poor durability.

In 20th century, the people used ramie fibre to make a open weave fabric called "mechera" for shirts and gowns to be used in warm climates. 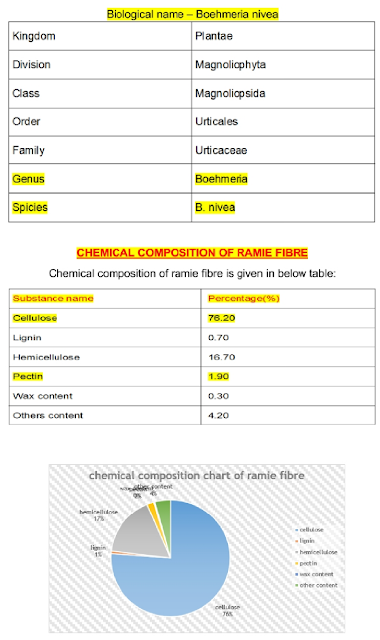 The sandy loam or loamy, very sandy is considered as the best suitable soil for the production of ramie fibre plant. The plant is highly sensitive to soil moisture conditions.
The ramie's crop gets well developed in the areas having good irrigation system. The farmers should not sow this crop if there is a problem of rain water logging and floiding in their fields. The soil should not have the deficiency of calcium. The ph of the soil should be range from 5.5 to 5.6

Ramie is propagated vegetatively through rhizomes for commercial production throughout the world. The rhizomes are obtained from the roots of healthy and diseases free plants which are dug out by a spade from an already established plantation. The rhizomes are then removed separately and are converted into  pieces of 10 cm. to 15cm. in length.
These pieces are planted in fields after cutting. These pieces can be stored under the place where sunlight directly does not reaches upon the pieces.

The rhyzomes pieces are normally planted in furrows spaced 40 cm. to 50 cm. apart. The rhyzomes are planted under 3 CMS. deep in the soil. The each piece is planted at 45 ° angle. The one third of the length of the piece is kept above the ground. The row to row distance keeps 80 - 100 cms.

If the soil is rich, additional fertilizer of 80 kg N, 60 kg P2O and 60 kg K2O is recommended. If the soil is deficient such as sandy loam soil, higher rates of nitrogen and potassium are needed. Apply fertilizer using split method of application, spread out from 5 to 8 times annually.

The ramie has an average yield of 1,575 kg of dry fibre based on three cuttings per hectare per year. Approximate potential yield of ramie per hectare (per year) may reach 2,700 to 4,800 kg of fibre per year. Dry fibre recovery ranges
from 3.5% to 5%.

The grading of ramie fibre is conducted as follows: 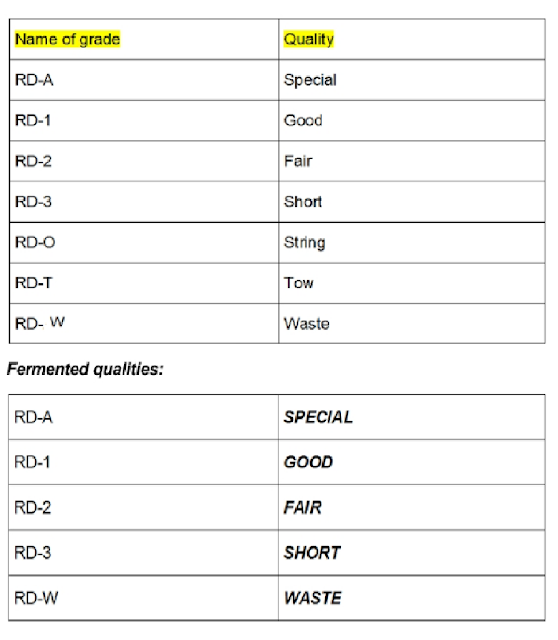 USES AND APPLICATION OF RAMIE FIBRE:

Uses of ramie fibre are given below:

• Fire hose pipe of the clothes.

•  The ramie fibre resists to growth of bacteria and mildew. 💘

• The ramie is highly absorbent and therefore comfortable to wear, especially during warm weather.

• It has stain repellent character.

• It doesn't get affected  by mild acids.

• It has very good dyeing affinity.

•  The strength of ramie gets increased in wet condition.

• It smooth lustre and appearance  gets improved with washing.