The coir is a natural fibre getting extracted from the husk of coconut. It is used to make door mats, brushes, coir mattresses, etc. The coir is the fibrous material found between the hard, internal shell and the outer cover of a coconut. It is also used  pain upholstery padding sacking and horticulture. White coir, harvested from unripe coconuts, is used for making finer brushes, string, rope and fishing nets.

The humans are using the ropes and cordage made of coconut fibre from ancient time. The Indian used ropes made of coir fibres to anchor their ships many centuries ago. The Arabian writer has written in his book in 11 th century AD that people were using coir fibre ropes for anchoring the ships and rigging too. The industrial use of coir fibres got started in the united kingdom at the end of the first half of the 19 th century.

The chemical composition of coir fibre is given in the below table: 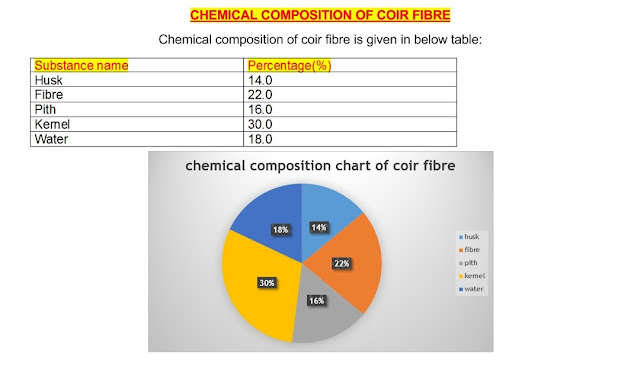 Major coir fibre cultivating countries are given below:

“Coir fibres are found between the hard, internal shell and the outer cover of a coconut”. The individual fibre cells are narrow and hollow. The wall of the fibre gets made of cellulose.  The immature coir fibres are poor. The coir fibres get hardened and yellowish later on. This change gets happened due to the deposition of a layer of lignin on their walls. The length of the coir fibres varies between 10 - 30  centimetres.

There are two varieties of coir fibres get harvested.

The two varieties of coir are brown and white.

The brown coir is harvested from fully ripened coconuts. It is thick and strong. It poses high abrasion resistance. It is typically used in mats, brushes and sacking. The fully mature brown coir fibres contain more lignin and less cellulose. These fibres have less flexibility.

White coir fibres harvested from coconuts before ripening of coconut. The colour of coconut looks white or light brown before ripening. The fibres are finer and smoother in this stage. These fibres have low strength. They are generally spun to make yarn used in mats or rope.

The coir fibre is relatively waterproof. It is the fibre which has good resistance to salted water.  The freshwater gets used in processing of brown coir, while seawater and fresh water are both used in the production of white coir.

Coconuts are the seeds of a species of palm, “Cocos nucifera”. These palms flower on a monthly basis and the fruit take one year to ripen. A palm tree may have fruit in every stage of maturity. A mature tree can produce 50 to 100 coconuts per year.

Coconuts can be harvested from the ground once they have ripened and fallen, or they can be harvested while still on the tree. A human climber can harvest about 25 trees in a day, while a knife attached to a pole can up the number to 250 trees harvested in a day. Green coconuts, harvested after about six to 12 months on the palm, contain pliable white fibres. Brown fibre is obtained by harvesting fully mature coconuts when the nutritious layer surrounding the seed is ready to be processed into copra and desiccated coconut.

The fibrous layer of the fruit is then separated from the hard shell (manually) by driving the fruit down onto a spike to split it (dehusking). “A well-seasoned husker can manually separate 2,000 coconuts per day”. Dehusking machines are now available which crush the whole fruit to give the loose fibres. These machines can process up to 2,000 coconuts per hour.

Because coir is high in sodium and potassium, it is treated before use as a growth medium for plants or fungi by soaking in a calcium buffering solution. The most coir sold for growing purposes is pre-treated. Once any remaining salts have been leached out of the coir pith, it and the coir bark become suitable substrates for cultivating fungi. Coir is naturally rich in Potassium, which can lead to Magnesium deficiencies in soiless horticultural media.

“The fibrous husks are soaked in pits or in nets in a slow-moving body of water to swell and soften the fibres. The long bristle fibres are separated from the shorter mattress fibres underneath the skin of the nut, a process known as wet-milling”. The mattress fibres are sifted to remove dirt and other rubbish, dried in the sun and packed into bales. Some mattress fibre is allowed to retain more moisture so it retains its elasticity for twisted
fibre production.

Following are the some common uses of coir fibre:

• fishing nets due to its good resistance to saltwater.

• Coir is also used as a substrate to grow mushrooms.