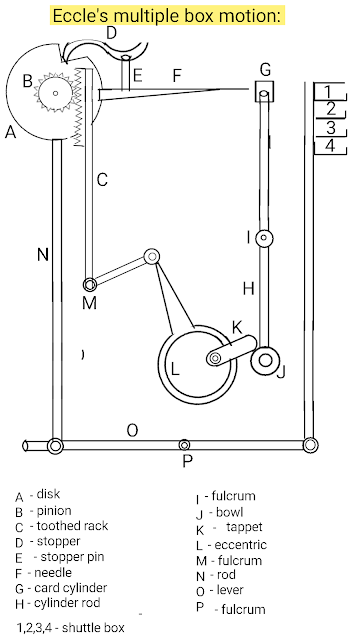 A disc A is used in this mechanism. A pinion B is also fastened on the disc shaft. A toothed rack C is connected to the teeth of pinion B. The bottom part of the toothed rack is fulcrummed at point M. An eccentric disc L is mounted on the bottom shaft of the loom. The one end of rod N comes down and gets connected to the one end of lever O. The lever O is fulcrummed at point P. The other end of the lever is connected to the shuttle box lever. Rack C makes up and down movement when eccentric L rotates. The card cylinder G rotates by tappet K. A pattern chan is mounted over the card cylinder.  The tappet K is mounted on the bottom shaft of the loom.  Stopper( catch) is used to prevent unnecessary movement of disc A . Needle F rests in front of the card cylinder. Four shuttle boxes are mounted on the top of the shuttle box shaft.
Working principle of eccle's drop box motion:
Since the eccentric is fastened on the bottom shaft so that eccentric L rotates with the bottom shaft in the same direction. The eccentric transfer motion to the toothed rack C. Card cylinder receives motion through a tappet K and bowl J.
Pattern chan is mounted on the card cylinder. The cylinder pushes the needle.  If there is a hole in the pattern cylinder, the needle F gets entered into the hole of the pattern chain. The teeth of rack C are disengaged from pinion B. Disc A remains stationary and stopper (catch) D locks the unnecessary movement of the disc. Thus the position of the shuttle box remains unchanged. When the blank portion of the pattern chain comes in front of needle F, the blank portion of the pattern chain pushes the needle against the rack. The teeth of the toothed rack get engaged with pinion B. Since the toothed rack receives the up and down motion through the eccentric L so that disc A makes a half turn. Now the shuttle box position gets changed. In this way, the eccle's dropbox motion works.
Please click on the below video link to watch the full topic in Hindi:
at February 22, 2021
Email ThisBlogThis!Share to TwitterShare to FacebookShare to Pinterest
Labels: check fabric weaving, drop box motion, eccles drop box motion, multicolour picking motion, multicolour weft weaving, multiple box motion