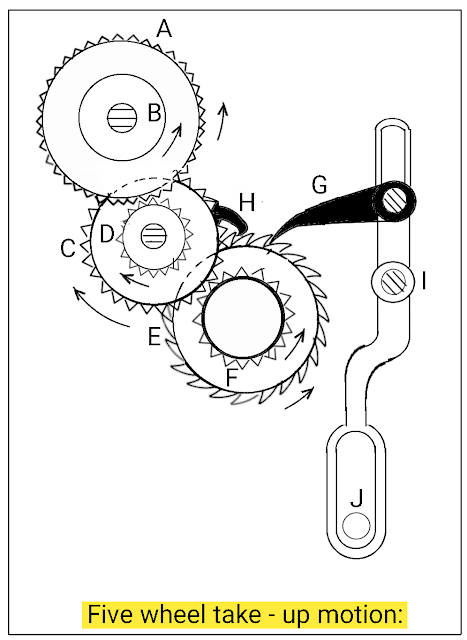 I - fulcrum
G - pushing pawl
E - ratchet wheel
F - change pinion
A - beam wheel
B - pin roller or take-up roller or emery roller
H - catcher
C - stud wheel
D - stud pinion
J - finger
Five wheels take-up motion is an intermittent take up motion. A train of five gears is used in this five wheel take-up motion mechanism. This mechanism receives the motion through slay sword by a connecting rod. One end of connecting rod gets connected to the sley sword with the help of a stud. This end of connecting rod gets free to rotate in both directions. The other end of this connecting rod is fulcrummed in the bottom of the finger 'J'.
When the crank is rotated, it imparts rocking motion to the sley sword. The connecting rod is connected to the sley sword from one side. When the slay starts to move from front dead centre to back dead centre, the slay starts to push the connecting rod fulcrummed with it.
When connecting rod travels toward the back dead centre, it pushes the finger 'J' fulcrummed with the other end.
The connecting rod pushes the finger 'J'. Since the finger 'J' is fulcrummed at point 'I', so that finger makes the angular movement at fulcrum 'I'. The direction of this angular movement of the finger changes with the slay sword position.
The pushing pawl 'G' is mounted in the upper slot of the finger 'j'. This pushing pawl is mounted with the help of a stud. This pawl can move freely on this stud.
As the finger goes toward the back dead centre, the pushing pawl impart the angular motion to ratchet wheel 'E'. The ratchet wheel starts to move now.
This ratchet wheel is mounted on the shaft. The ratchet wheel 'E'  rotates with a shaft. A change pinion 'F' is also fastened on this shaft. The change pinion 'F' and ratchet wheel 'E' rotate together in the same direction as shown in the above figure.
A catch 'H' ( pulling pawl) is also fitted over the ratchet wheel. This catch prevents reverse motion of the ratchet wheel when the finger goes back toward the back dead centre.
Change pinion imparts motion to stud wheel 'C' fastened on a shaft. This shaft is rotated with a stud wheel. Another stud pinion 'D' is also fastened with this shaft. The stud wheel and stud pinion rotate together.
The stud pinion is geared with beam wheel 'A' fastened with a take-up roller shaft.  The stud pinion imparts motion to the beam wheel. When this beam wheel rotates, it revolves the take-up roller 'B' together.
The take-up roller rotates in an anti-clockwise direction. Since the fabric passes over this take-up roller so that it pulls ( draws) the fabric in a forwarding direction.
at February 09, 2021
Email ThisBlogThis!Share to TwitterShare to FacebookShare to Pinterest