This mechanism is totally different from loose reed motion. A stop rod is mounted on the loom. This stop rod runs under the sley. Two fingers are mounted on this stop rod. One finger is fitted at each side of the shuttle box. Each finger presses against the swell mounted in the shuttle box. Two daggers also get mounted on the same stop rod. One dagger is fitted at each side of the shuttle box. The daggers are mounted in such a way that they face the frog. This frog gets mounted on the sidewall of the loom. This sliding frog carries a brake lever. The front end of the brake lever touches the adjustable bolt which knocks off the starting handle in case of shuttle trapping. The rear end of the brake lever is connected to the brake assembly. A spiral spring is connected with the dagger. The sliding dagger touches two vertical springs. 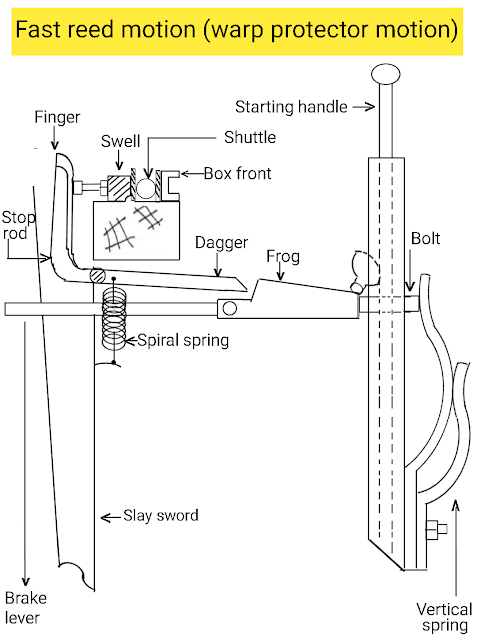 working principle of fast reed motion mechanism:
When the shuttle travels from one shuttle box to another shuttle box during weft insertion, the swell mounted in each shuttle box feels the presence of a shuttle in the box. The spiral spring mounted on the dagger constantly applies pressure on the finer. The finger presses the swell mounted in the shuttle box. When the shuttle reaches the box, it presses to the swell. As the swell gets pressed by the shuttle, the finger receives partial rotatory motion. Since one end of this finger is connected with the dagger so the dagger lifts up. Now this dagger passes over the frog without touching it. Thus the sliding frog doesn't receive any kind of movement and the starting handle position remains unchanged. The loom gets to continue to run.

Now suppose that loom is running continuously. If the shuttle gets failed to reach the shuttle box due to any reason, the swell mounted in the shuttle box doesn't get pressed by the shuttle. Since the finger receives the partial rotatory motion through swell and it helps to lift up to the dagger so that the dagger remains in front of the sliding frog. Now the dagger pushes to the sliding frog. The sliding frog pushes to the starting handle knocks of through adjustable bolt mounted on the starting handle. The rear end of the brake lever connected to the brake assembly actuates the loom brake immediately. The loom is stopped without completing the beating motion. Since the loom stops suddenly, a heavy jerk gets applied to the different loom parts. This jerk is absorbed by two vertical springs mounted behind the sliding frog.

Please  watch the below video link in Hindi about fast reed motion: