Cotton and Flax fibres blended yarn and estimated quantitative analysis of each component:
When the flax( linen) fibres are blended with cotton fibres during spinning, the detection of the fibre types gets much difficult. When a technician observes the yarn, he finds that the small irregular fine slubs are appearing on the yarn surface. He also observes that cotton is also present in this yarn. Now a tough challenge appears in front of him. He thinks about those fibres which create a slub effect like small irregular slubs present in that yarn. He makes a conclusion as per past experience that cotton fibres are blended with either flax or hemp fibres. Now he starts the testing procedure as below:
Physical test:
First of all, the physical test is conducted to detect the type of nature of fibres like animal fibre, vegetable fibre, regenerated fibre, and thermoplastic fibre.
As the technician conducts a burning test, he finds that yarn is burning like paper, he gets confirmed that the yarn is made of cellulosic fibres. 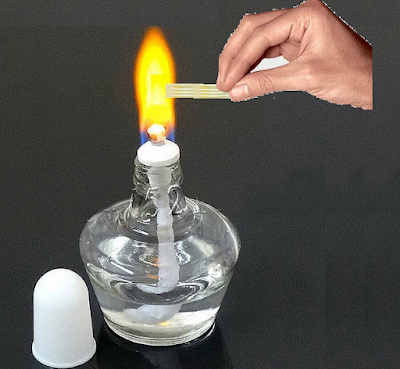 Now, there may be two possibilities:
1- Plant-based fibre.
2- Regenerated  cellulosic fibres
Now, he again immerges the yarn into the 59.5 % sulphuric acid( w/w) at room temperature for 20-30 minutes. If the yarn doesn't dissolve, he gets confirmed that yarn contains plant-based fibres only.
There may be a blend of either cotton with flax or cotton with hemp.
we are discussing the testing of cotton and flax blended yarn.
Detection of Flax and Cotton.
The whole testing procedure gets completed in the below steps:
1 - The yarn is kept in the standard atmospheric conditions for at least 8 hrs.
2 - A small amount of yarn is weighed with the help of a suitable weighing scale accurately.
3 - The sample threads are dyed by immersion in the alcoholic fuchsine solution (1 gram fuchsine in 100 c.c. alcohol).
4 - Now, the sample is washed with clean water until the colour ceases to run.
5 - The washed sample is steeped in the ammonia for about three minutes.
6 - The linen threads get dyed rose colour, whereas the cotton threads will be decolourised.
Quantitative estimation of linen and flax fibres:
For the purposes of quantitative estimation of the linen and cotton in the samples, previously freed from colour and dressing by a suitable boiling in dilute hydrochloric acid or distilled water, followed by thorough rinsing, is dipped for one and a half or two minutes in concentrated sulphuric acid.
Now, the sample is rinsed out well, rubbed between the fingers and neutralised by steeping it in the dilute ammonia or sodium carbonate solution.
After washing over again in the water, the threads are pressed between two blotting papers. now the threads get dried.
Observation and calculation:
Now, he takes an observation after complete drying.
The linen fibres get found to have retained their structure.
The cotton fibres get dissolved after passing through a gelatinous stage in which they get torn like tinder.
Suppose
Sample weight        = A grams
Linen fibres weight  = B grams
Cotton fibres weight = (A - B) grams
Linen fibres(%)         = (B/A) * 100
Cotton fibres(%)       = {(A-B)/A}*100

at September 12, 2021
Email ThisBlogThis!Share to TwitterShare to FacebookShare to Pinterest