Why does compact spinning technology require in the ring spinning process?

·  The main reason  of the fibres migration in the conventional ring spinning process is the tension difference between fibres during the yarn formation.

·   When the twist is inserted into the ribbon like fibres bundle and the yarn formation takes place.

· To release the stress, fibres subjected to tension try to shorten their path length in the yarn while fibres under compression try to lengthen it.

· As a result of this, fibres leave their perfect helical path and migrate between layers of the yarn.

·   In the other words, a long spinning triangle results in a longer weak point, and thus more end breaks in the at ring frame.

·   However, with a long triangle, fibres are better bound into the yarn. 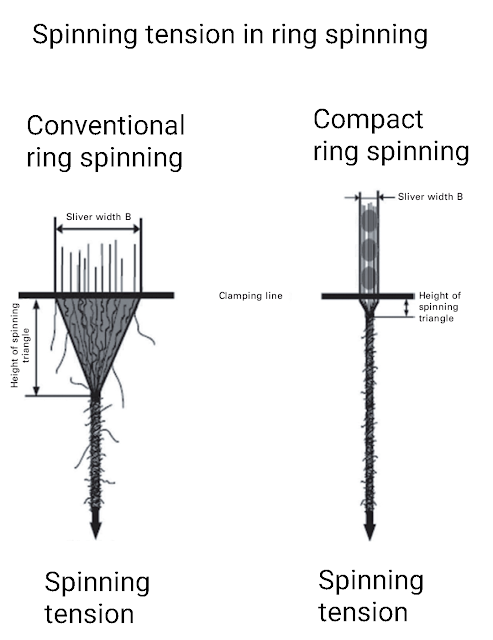 ·The tension difference among fibres during twist insertion is small  in ring spinning equipped with compact spinning system due to the almost  elimination of the spinning triangle.

·Therefore fibre migration in compact yarns could be expected to be less than that in conventional ring spun yarns.

· Klein has found out that a short spinning triangle represents a short weak point and thus fewer end breaks.

·If the spinning triangle is too short and the deflection of the fibres on the edges has to be very sharp during the binding-in.

·       This is not possible with all fibres. Therefore a very short spinning triangle results in some fibres on the edge not to be integrated into the yarn, resulting in loose fibres or ‘fly’.

·  Other fibres on the edge might be bound-in at one end only, causing hairiness. 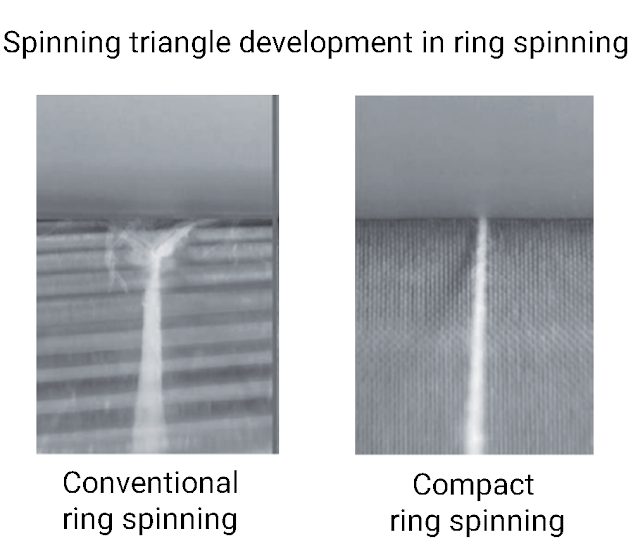 There are mainly three kinds of compact spinning devices which are described as below:

·This system consists of an additional ‘drafting zone which is mounted on a standard three-roll ring spinning machine.

·An air-permeable lattice apron runs over a suction tube in this drafting zone .

·The suction tube is under negative pressure and there is a slot tilted in the direction of fibres movement for each spinning position.

·   When the fibres leave the front roller nip line, the lattice aprons guides the fibres over the openings of the suction slots.

·The fibres move sideways and condense due to suction air flow.

·The openings of the suction slots get inclined to the direction of fibres flow.

·These suction slots inclination help to condensing by generating a transverse force on the fibres band during their transport over the slot, causing the fibre band to rotate around its own axis.

·The lattice apron carries the fibres attached to it up to the delivery nip line.

·The difference of diameter between delivery top roller the front bottom roller generates a tension in the longitudinal direction during the condensing process.

·The tension ensures the straightening of curved fibres, and therefore supports the condensing effect of the negative pressure. 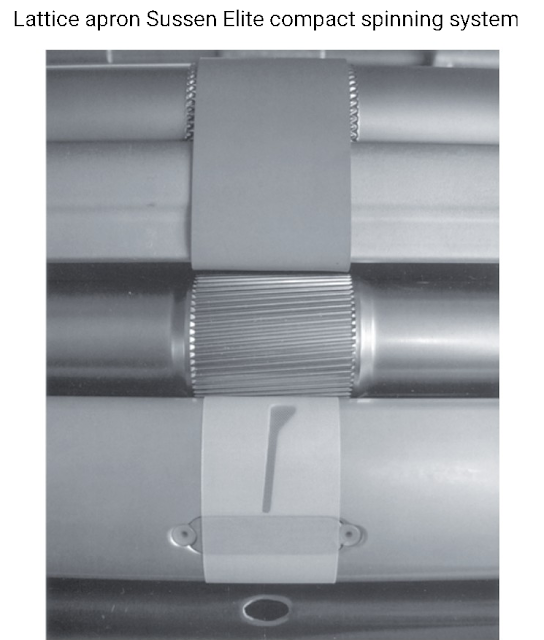 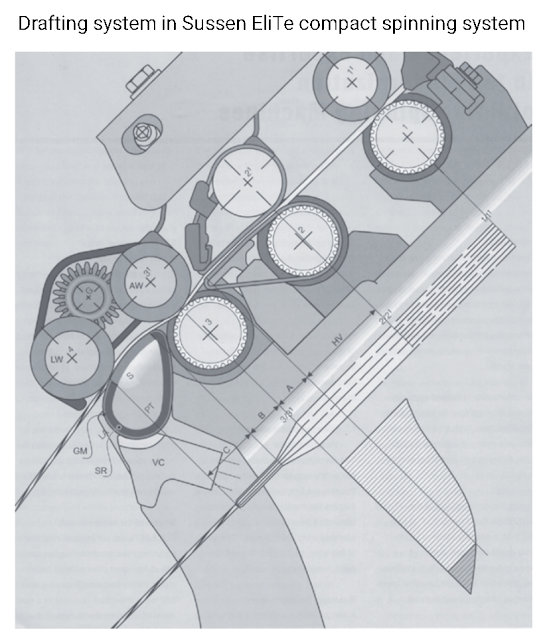 ·The compact spinning concept illustrated in the figure  is the one represented by the Rieter ‘ComforSpin’ process.

·Aerodynamic forces are used to laterally condense the drafted fibres ribbon after the main drafting zone in this system.

·As a result of the aerodynamic forces, the spinning triangle becomes so small or  it gets  almost eliminated.

·The exit zone of this system is modified to allow fibre condensation.

·The exit roller is replaced by a perforated drum (1), within which is a stationary suction unit that is connected to the machine’s central extraction unit (2).

·The fibres delivered by the exit nip line of the drafting system are held on the surface of the perforated drum, moving at the drum’s peripheral speed.

·In this way, the ComforSpin technology allows aerodynamic parallelization and condensation of the fibres after the main draft.

·The spinning triangle is reduced to a minimum in this compact spinning system.

·The compacting zone is the heart of the machine which consists of the perforated drum, suction insert, and air guide element.

·The positively driven perforated drum gets hard-wearing and resistant to fibres clinging.

·There  is an exchangeable stationary suction insert with a specially shaped slot inside each drum.

·This drum gets connected to the suction system of the machine.

·The air current created by the vacuum generated in the perforated drum condenses the fibres after the main draft.

·The fibres are fully controlled all the way from the nip line after the drafting zone to the spinning triangle.

·An additional nip roller prevents the twist from being propagated into the condensing zone.

·       The compacting efficiency in the condensing zone is enhanced by a specially designed and patented air guide element. 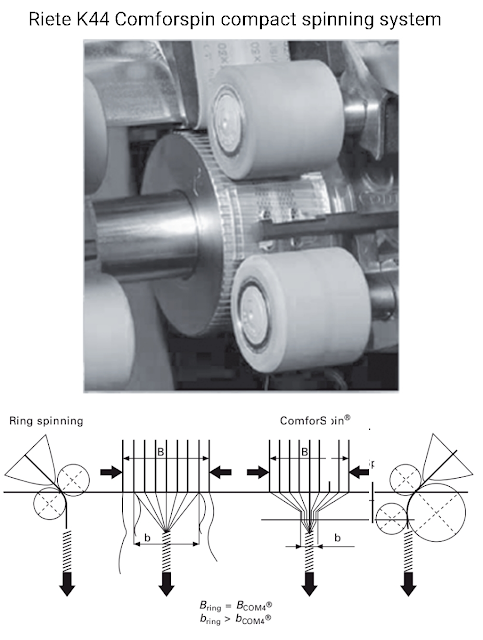 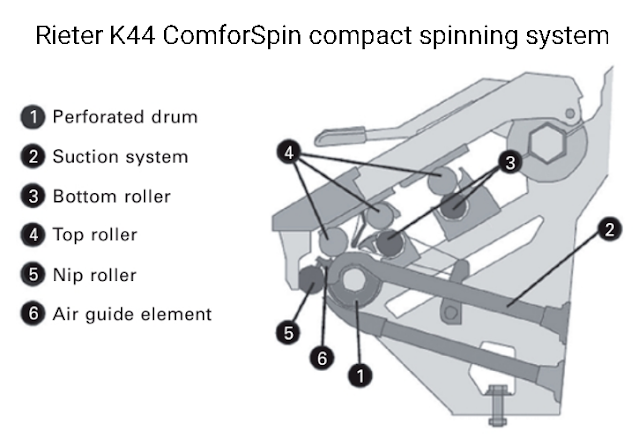 ·This system  also works on the basis of eliminating the spinning triangle.

·The conventional three cylinder drafting system is used in this technology.

·The fibres emerge from the drafting system and get condensed under suction onto the surface of a perforated belt.

·The condensed fibre strand undergoes a substantial reduction in width prior to twisting.

·This reduction in the difference between the width of the fibres emerging from the drafting system and the yarn diameter effectively eliminates the spinning triangle.

·The compacting zone can be adapted to the raw materials by the adjustability of the additional feed, because the compacting zone between the two front cylinders can be influenced by a lower speed of the perforated apron with maximum –4.0%. For the cotton compact spinning process, from 0 to 4% additional feed is required from a technological point of view.

· The machine can be optimally set to the most fibres with this spectrum .

·This has a positive influence on the position of the individual fibres, since only unstressed and parallelised fibres can be deflected and compacted. 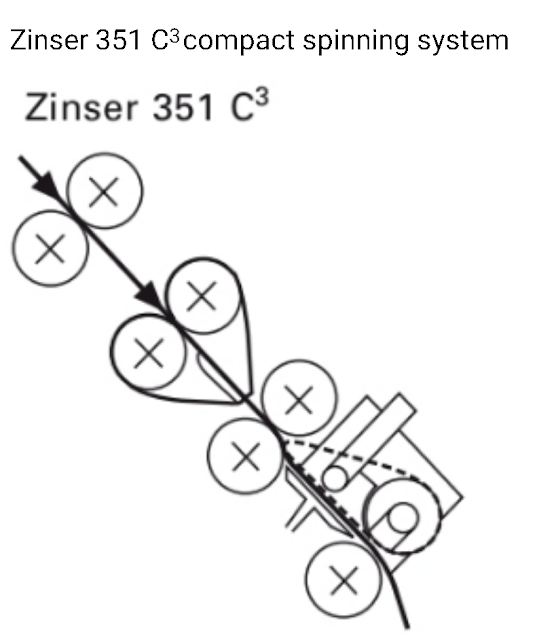 ·Improved elongation at break even with lower twist levels.

·Softer feel due to low twist.

·The compact spinning process produces a new ring-yarn structure which is close to the idealized staple fibre yarn construction.

·better utilization of the raw material.

· Higher delivery rates can be achieved.

·It is therefore possible to use low quality cotton while maintaining yarn strength equal to that of conventional ring spun yarn with the same twist level.

·The only limitation of compact spinning is that the rehabilitation from conventional ring spinning to the compact system needs more investment.

·Importantly, there are concerns about the negative influence of the low hairiness.

·A study pointed out that the reduced hairiness might lead to more frequent traveler change, since hairs protruding from the yarn body provide lubrication and a cooling effect on the traveler and thus reduce traveler wear.

·This issue questions the economics of the compact ring spinning process.

·A study shows that it is effective only for longer (or combed) fibres (Kampen, 2000).

at October 15, 2022
Email ThisBlogThis!Share to TwitterShare to FacebookShare to Pinterest