· The main objective of the Siro spinning is to achieve a weavable worsted yarn by capturing strand twist during twist insertion on the ring-spinning frame.

· To reduce the cost of production in the spinning stage up to half by increasing production per spindle by roughly two times.

What is Siro spun yarn?

· Siro spun yarn is a virtual - two-fold yarn in which the two components are untwisted strands rather than twisted singles yarns.

· It builds on the concept of self-twist spinning up to some extent.

· One strand is made to follow a longer path so that when the two strands are brought together their twist is out of phase.

· In trying to untwist, the two strands twist about each other, capturing oscillating twist in each strand.

· Production rate 200 meters /minute is possible and the yarns could be used for knitting.

· However, to be weavable the yarn had to undergo a real twisting in a separate twisting step (ring doubling or two-for-one twisting process) as with normal two-fold yarn production.

· Two strands were fed side-by-side through the drafting system.

· These strands were passed through a further pair of rollers after leaving the front rollers.

· This pair of rollers was intermittently blocked the twist from propagating up to the nip line.

· The two strands were brought together by the twist to form a large, long spinning triangle (the ‘vee’).

· The twist-blocking rollers caused the twist running into the two strand arms to increase and decrease.

· This intermittent twist becomes trapped in the yarn below the convergence point, which is held fixed by a guide, as alternating twist of the strands relative to the rotating point of contact (i.e. the mean folding twist).

· The alternating twist enables surface fibers to be trapped between the two strands.

· Plate and Lappage (1980) showed that the amount of trapping is proportional only to the alternating strand twist and is independent of the two-fold twist.

· An alternative method by Lappage (1973) achieved a similar result by vertically oscillating the convergence guide without the twist-blocking rollers.

· Even though twist is observed in the strands during Siro spun spinning, if it is constant then none of it is trapped in the yarn.

· This is illustrated in the model of below Fig.  (following Plate and Lappage, 1982) in which the two singles strands are represented by long rubber cylinders.

· One of the untwisted cylinders has a black line along its length Fig. (a), representing a surface fiber.

· If real twist is inserted then the surface fiber traces a helical path Fig. (b).

· Every turn of singles twist leads to a trapping point of the fiber after two-folding Fig. (c).

· This is the basic reason why ordinary singles yarns (or Siro spun yarns at small strand spacing) are not weavable.

· In such yarns there is a small amount of fibers migration, due to varying spinning tensions and movement of the delivery positions of fibers, but overall many surface fibers are poorly trapped and will be easily rubbed up along the yarn during weaving.

· Constant strand twist above the convergence point just leads to fibers maintaining their relative positions in the two strand yarn; removal of the two-fold twist will leave two untwisted strands.

· When two strands are held at both ends insertion of real twist is not possible and only varying twist can enable trapping.

The changes needed to the ring spinning frame to produce Siro spun yarns are as below:

2- A double set of roving guides. 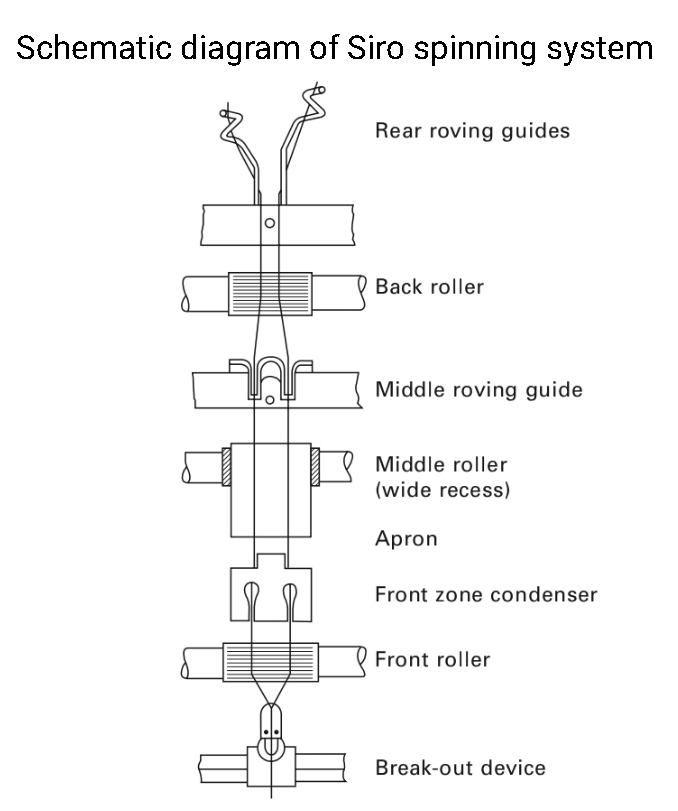 · The yarn count per spindle is doubled and the amount of twist inserted is usually the same as would be inserted in the two-folding operation (a metric twist factor of 120 to 130) which is similar in turns per meter to that put in the singles yarn.

· The recommendation is still to have the same total number of fibers in the yarn cross-section as the equivalent two-fold yarn (e.g. for wool, at least 2 ¥ 35 = 70, given the accepted spinning limit of 35 fibers in the yarn).

· This twist level and number of fibers are needed to ensure good spinning performance by avoiding drafting of the strand arms.

· Studies (Plate and Feehan, 1983; Plate, 1983a) have shown that the optimum strand spacing is a balance between improved abrasion properties and poorer evenness and spinning performance.

· It was found that yarn abrasion resistance increases linearly with strand spacing, hairiness drops rapidly at first, then slowly, and yarn evenness, tenacity and elongation improve at first, then plateau and later decrease.

· The standard strand-spacing of 14 mm has been adopted for worsted spinning (Plate, 1983a).

· On average Siro spun yarn have marginally poorer evenness, possibly due to correlations between the drafting of strands through the same drafting zone and due to occasional strand-arm drafting.

· Siro spun yarns are not quite as abrasion resistant as the equivalent two-fold and more likely to fail on the loom under extreme conditions, such as in the selvedge.

· It is much better to think of Siro spun as a singles yarn with improved binding of the surface fibers.

· As singles, Siro spun yarns are leaner than the equivalent two-fold yarns.

· One drawback is that winding and clearing are carried out on the final yarn rather than the singles.

· The joins (splices) must survive weaving unaided by a good (un spliced) yarn. The performance of splices in weaving is so critical that Siro spun could not gain wide commercial adoption until improved wool splicing (the Thermo splicer™) was available.

· This is a potential cause of more visible streakiness in plain-weave piece dyed fabrics where the uniform colour and simple pattern provide the least hiding of the yarn irregularity that is always present.

at December 04, 2022
Email ThisBlogThis!Share to TwitterShare to FacebookShare to Pinterest