There are more than 1600 species of bamboo plant  found in the different parts of the world. “These species of bamboo are grown  in various  climatic conditions from cold mountains to hot tropical regions”. Near about  millions hectares area  of our planet is covered with bamboo plant. The most of area covered by bamboo plants is found in Asia continent.

Scientifically, the bamboo plant falls in the  category of a grass. It is as not a tree. Since we know that bamboo plant’s vast root network sprouts new shoots after each harvesting, therefore there is ni need to of replantation of bamboo plant after harvesting. They grow again after each harvesting. The bamboo plantation requires for one time only.s The vast root network almost zoom up while we watch them, pulling in sunlight and greenhouse gases and converting them to new green growth. Bamboo  just might be the world’s most sustainable resource. It is the fastest growing grass and can shoot up a yard or more a day.

Bamboo plant doesn't require any kind of fertilizer and pesticide to boost it's growth. We can say that the bamboo plant is a pure organic source for producing textile fibres. The presence of antimicrobial substance in the bamboo plant prevent the attack of pest and fungi.  Although  some pathogen problems do still exist in some bamboo plantations.

when a new shoot comes out  from the ground, the new bamboo tree achieves its full growth within the period of 8 to 10 weeks. “The tree is gotten maturity in 3–5 years”. Bamboo is re-harvested continuously without  damaging the surrounding environment. Since  bamboo is a type of grass, sothat it  grows automatically after being harvesting like grass of lawn .This regular harvesting is actually of benefit to the health of the plant. The some studies  show that felling of canes leads to healthy re-growth and an increase in the amount of biomass the next year

The bamboo is high yield crop.  The yields ( out put) of bamboo crop falls up to  60 tonnes per hectare. It is more than the most of the trees.  Today, when the land use is under big pressure, bamboo’s high yield per hectare becomes very significant.

There are two processes used to produce bamboo fibres:

Litrax (Swiss company)  engaged in the producing the bamboo fibre claims that their process is  more natural during processing the bamboo wood into fibres. In  the mechanical method of producing bamboo fibre, the woody parts of plant are crushed with the help of crushing machine. The enzyme retting is applied to  this crushed material using  natural enzymes. These enzymes helps to break the  bamboo walls into a soft and pulpy mass. The natural fibres get obtained after retting. These natural fibres are combed out mechanically and are spun into the yarn.  This method of production is similar to production process used in linen jute or hemp fibres. This production method is more eco friendly than other method. “Due to more natural method of producing bamboo fibres, the  fabrics made from this bamboo fibres are  also called bamboo linen”. This method of production is not used commonly because this is much labour consuming process. The cost of production is too high. Due to these reasons very small quantity of bamboo linen is produced for clothing.

1. First of all the leaves and soft inner pith is extacted from the bamboo trunk. This material is crushed mechanically.

2. The crushed material is kept in a solution of sodium hydroxide (NaOH) having concentration of 15% - 20% for soaking. This soaking process takes 1- 3 hours to complete. Temperature during soaking is kept between 20 °C – 25 °C. A alkali solution of bamboo cellulose results after completion of soaking.

3. The alkali solution  of bamboo cellulose  is then pressed to remove any excess amount of  sodium hydroxide solution. Now this alkali cellulose is crushed with the help of a grinding machine . the grinded material is left for drying for a period of 24 hours.

6. “Now this viscose solution is ready for spinning”.The viscose  bamboo cellulose is passed through spinneret nozzles with the help of high pressure feeding pump. The fibres coming out from nozzles of spinneret go  into a large vessel having solution of diluted sulphuric acid. This sulphuric acid makes hard to viscose bamboo cellulose sodium xanthogenate and reconverts it to cellulosic bamboo fibres. These fibres are wound on to the bobbins or cut into stapple fibres as per requirement.

The properties of bamboo fibres are given in below table: 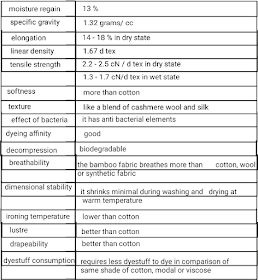 The bamboo fibre has following uses:

• Because of its anti-bacterial property, the  non-woven fabrics made of bamboo fibres are widely used  to make  hygiene products such as sanitary napkin, masks, mattress,food-packing bags.

• It is used to make home furnishing products such as curtain, television cover, wall-paper and sofa slip cover.

• Due to good moisture absorbency, it is used to make   towel and bath robe.