Nylon 6 is produced by “ring opening polymerization” of caprolactam, which has six carbon atoms.  When caprolactam gets heated at about 533 Kelvin temperature in an inert atmosphere of nitrogen for  4-5 hours, the ring of caprolactum starts to break . The ring opening gets started by water through hydrolysis process. The  growth of the molecular chains gets continued in a nitrogen atmosphere at low pressure. The viscosity of the caprolactum begins to change from fluid to a honey-like state. Thus  hot molten polymer is obtained.

This molten polymer is  pressed through a type of spinnerets into a water quench, where the polymer gets cooled down and gets a shape of a solid forming a strand. In the granules making machine, these strands of polymer are cut and “granulates of polymer of nylon 6 is manufactured”. The whole reaction follows below chemical equation:

The spinning of nylon 6 is done by using the “melt spinning”  process. In this process, the polymer gets melted under exclusion of air at a temperature of 250 °C- 270 °C ( 30 °C-50 °C more than the melting point ). For a very homogenous melting process, the polymer is melted in an extruder. The hot and molten polymer is fed to the spinnerets with the help of a feeding pump and extruder. This molten polymer passes through very small holes of spinnerets. “Thus the nylon 6 filament is formed”. On the lower part of the spinneret, the filaments are entered the quench duct. This is a part of 2-4 metres where the still hot filaments are quenched with air. It is very important to keep the airflow very gentle and stable to avoid the filaments sticking together.

During the drawing process, “the filaments are drawn 4 – 5 times of their original length”.  The macromolecules are oriented themselves in the best way during this process. It is the orientation of the highest parallelism which provides the required yarn properties like good tensile strength and tenacity.
The drawing is performed on godets, which are heated rotating cylinders, running at different speeds so that the filaments are drawn between the different duos.

After this drawing, the filaments (normally between 140 and 280) are intermingled with a continuous air jet. This intermingling tangles the filaments together and allows the customer to work with the yarn easily.

The now finished yarn is directly wound on spools. The size of such a spool is about 9.0 kg of yarn. The winding speed in the spin-draw process varies from 2000 to 4000 metres/minute. The fully automatic winders change within seconds from a full to an empty tube to start a new bobbin.

The spinning of nylon6 is a continuous process. Its production assembly runs without any stoppage. it is shut down for maintenance and making changes from one product to another product. 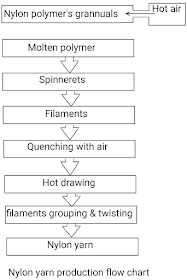