The carding is the second process of spinning which converts fed material  (lap) into uniform strand of fibres called “sliver”. The good quality carding of cotton is very important because the yarn quality very much depends upon it. The neps percentage in the yarn varies according to quality of carding process. "The carding is called heart of spinning". In the carding process, the material gets passed through carding machine. The fibres are made parallel to each other. The fibres tangle in this operation, thus it makes possible to remove the all types of impurities present in the cotton.

The carding, stripping and raising action take place during carding operation. In this way, continuous uniform sliver having parallel fibre arrangement almost free of impurities  is obtained after carding process.

The main objectives of carding process are given below:

• To open the cotton tufts fully (individual fibres of cotton tuft get opened in carding process).

• To make the fibres parallel to one another along the length of sliver.

• To remove very short fibres which could not  be spun into yarn.

• To remove all the neps present in the material generating in the previous process like blow room and mixing.

• To blend the fibres and to achieve fibre to fibre mixing.

• To finally convert the web of cotton into uniform sliver.

The common structure of a carding machine is illustrated in below schematic diagram: 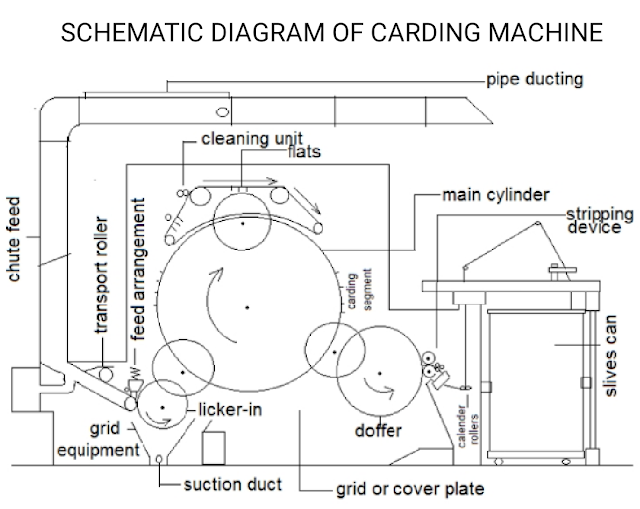 Working of a carding machine can be understand in following steps:

3. Feed roll, electrically coupled to the feed roll of the card.

The uniform fibres mat coming out from the chute feed system is supplied to the carding machine with the help of feed roller. The linear density (weight per unit length) of the fibre mat typically ranges from 400 to 1000 gram per metre (K tex). Weight per metre depends upon the number of fibres present in the mat cross section which ranges from 2 to 6millions of fibres depending on fibre fineness.

The fed material needs maximum opening and the linear density of material is reduced up to 3 – 5 grams per metre as per sliver count to be produced. The number of fibres in the card sliver cross section downs to approximately 40,000. This intense reduction is mainly obtained in the region between the feed roll and the licker-in. The feeding rate is normally kept low to allow exposition of small portion of the fibres mat to the action of the high speed licker-in. Licker-in has diameter of 25 centimetre. It rotates at a speed of 700 – 1200 rpm for cotton fibres and 400 – 600 rpm for synthetic fibres. The licker-in is covered with saw toothed wire clothing. These saw tooth wire removes the fibre tufts from the input fibre mat. The draft between licker-in and feed roll is kept around 100. The ratio of surface speed between the licker-in and the feed roll is equal to draft. High rotational motion of the licker-in creates centrifugal force. This centrifugal force tries to eject the heavy trash particles, and seed coats fragments out at the mote knives with the assistance of air draft. The licker-in eliminates about half of all trashes present in the cotton fibres. 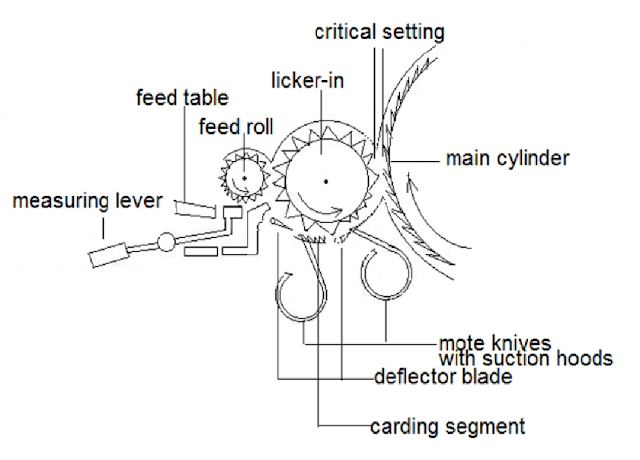 The opened and cleaned fibres by licker-in gets transferred to the main cylinder using stripping action. The cylinder strips the fibres from licker-in. Now these fibres begin to travel between cylinder and flats, this area is called carding zone. The surface speed of the main cylinder is kept higher than the licker-in to perform fibre removal by main cylinder from licker-in. The surface speed of the licker-in varies between 700 – 950 metres per minute. The surface speed of the cylinder ranges from 1000 metres per minute to 2400 metres per minute. ( at diameter is 1290 mm, and 260 to 600 rpm.). In this way, the draft varies between1.5 to 2.5.
The carding action with the cotton tufts takes place between cylinder and flat region. According to carding principle, carding action takes place when two surfaces having wires inclined in opposite direction and rotating in opposite directions one surface passes other point against point.
The flats are the bars which are covered with wire clothing. These flats rotate at very slow speed in the opposite direction of cylinder rotating at high speed. The speed of he flats varies with in the range of 8 – 20 centimetres per minute. Both are closely set to each other. The clearance between flats and cylinder is set by considering following factors:

• Material to be processed.

The bearing condition, the shape and dimensions of the wires are some of mechanical factors which affect the clearance between flat and cylinder.

Type of material to be processed:

fibre length, fibre fineness and fibre to fibre friction is some of the factors which affect the clearance between flats and cylinder.

This setting is so important because it plays very critical role in neps formation.  The main cylinder is the central part of the card. It has a diameter of approximately 1.3 metres and a working width of 1.0 metre. It contains an area of 4.0 square metres covered with wire clothing. The carding surface of the cylinder is made up of more than 10.000 metres of clothing wire with around 6 million single wire’s points.

By shifting the web feed unit and the doffer below the cylinder, more room has been made for the functions of pre- carding and post-carding.

In the pre-carding and in the post-carding area of the cylinder, 10 special elements of the multi web clean system can be mounted in the most different combinations. The first and the last elements are fixed.

The cleaning system consists of a mote knife with a hood under permanent suction. It separates dirt particles, seed coat fragments and dust particles.

Carding segment consists of two clothing strips with one support (twin top). A number of different clothing types and point populations are available depending upon the installation and the raw material.

The fibres come out of carding region in the form of a very thin web. The weight of carding web depends upon setting of flats v/s cylinder, carding speed, type of wire clothing used on the both cylinder and flats. Formed web is stripped from the main cylinder by another cylinder called a doffer. It has diameter of 700 mm. and rotates at up to 96 rpm. Since doffer rotates at very low surface speed in comparison of main cylinder. Thus condensation effect results in the web.  The fibre web is stripped from the doffer using a stripper roller. It is then passed through a pair of squeezing or crush rolls before it is finally accumulated width wise into a fibre stand form. The calendar rolls compress the fibre strand to provide better integrity and stable flow of material.

The sliver web speed forms the web to a sliver and helps to  guide it into the measuring funnel. The  sliver former is opened by pushing a button when sample for optical assessment of web quality is made.

This system registers the number of neps, trash particles and seed coat fragments. These data are transferred to the main control system of machine. These data are evaluated and displayed on the machine monitor.

An auto levelling system controls the variation of linear density of sliver and  helps to maintain the uniformity consistently. The main objectives of an auto leveller are given below:

2) To alter the machine draft, so that a high consistent sliver linear density is continuously produced.

Generally two types of auto levelling systems are use depending upon the working principle. Which are:

The open-loop system is generally used to correct the short-term variations of sliver. 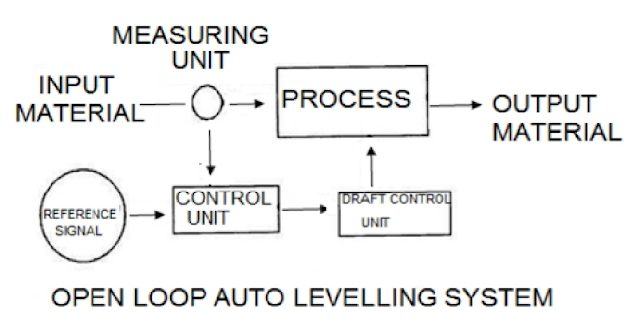 it is generally used to correct long-term variations in linear density of sliver. This system takes the measurements of the delivered sliver. In other words, we can say that the closed loop auto leveller monitors the results of corrective actions taken by it to maintain the sliver uniformity. 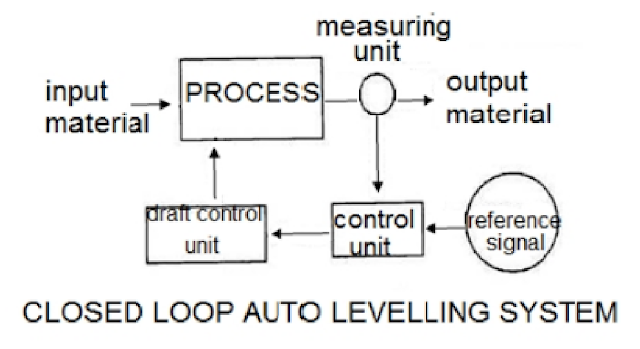 Carding faults, defects of sliver and their remedies

Drawing ( draw frame) a spinning process and objectives of drawing

HUCK A BACK WEAVE 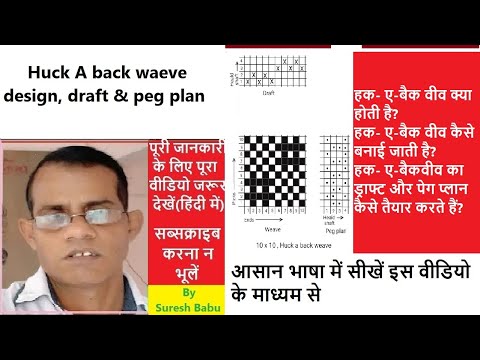