The roving frame/speed frame or simplex is a machine that comes between the draw frame and ring frame or between the comber and ring frame machine. The drawn sliver is used as a feeding material in a simplex machine. After completion of this process, the resulting material is called roving. We can say that "a simplex is a machine which converts the drawn sliver into a thin strand of fibres having some amount of twist". The sliver is drafted many times from its original length during the roving frame process and a little amount of twist is inserted into it to improve the strength of roving. This roving is wound onto the large conical packages. These packages are used as input material during the ring frame process. The weight per metre of sliver is reduced up to great extent and it is made suitable for ring frame.

OBJECTS OF SIMPLEX OR ROVING FRAME:

The roving or simplex frame machine is used to achieve mainly following objectives:

• To convert drawn sliver into roving and to make it suitable for ring frame process.

• To reduce the linear density of sliver (weight per unit length).

• To insert a little amount of twist in the roving to improve its strength of it.

• To make a large conical package of roving suitable for ring frame.

• To ensure easy and safe transportation of material by making large packages. 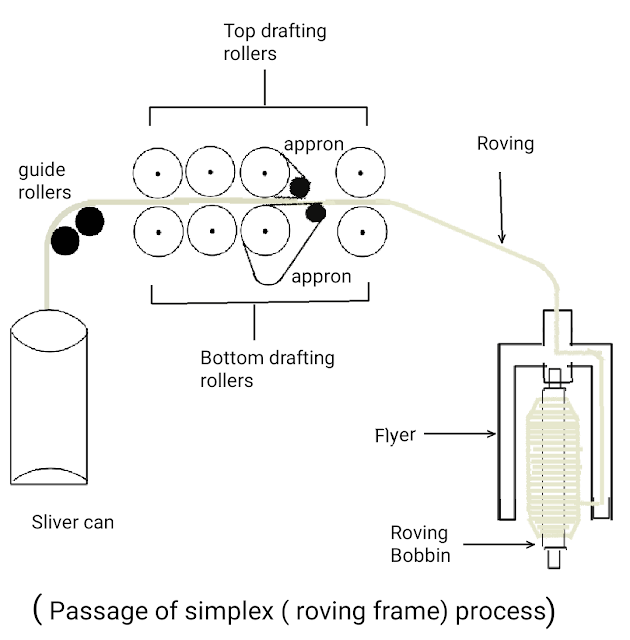 ° The sliver obtained from the draw frame or after combing is used as feed material in a simplex or roving machine.

° This sliver is put into the large can.

° This sliver, first of all, passes through separators.

° From this point, sliver goes over the guide roller and then tensioning rollers.

° Now the slivers enter into drafting zone, where it passes between drafting rollers. Generally, a draft of 6–15 draft is employed to the fed sliver. The drafting system attenuates the sliver many times of its original length and reduces the weight per unit length of the sliver.

°  The output material(roving) after drafting has very poor strength due to low linear density, therefore it needs a little amount of twist to hold the fibres together. The drafted strand of fibres passes through the flyer to provide this twist, Usually, 30-65 turns per meter are inserted into the roving.

° There are spindles in the flyers on which the twisted roving gets wound.
Please click on the below video link to watch the full article in Hindi:
You may also be interested in the following articles: