Drawing is one of the process which comes after carding in the manufacturing of yarn.
As far as the share of the drawing in yarn cost is concerned, it has very little effect on the production cost of yarn but drawing process (draw frame) plays very big role to improve the quality of yarn in many respects such as evenness, strength, elongation at break and degree of hairiness.
Draw frame process avails last chance to improve the sliver irregularities and to eliminate the dust and impurities present in carded sliver.
There is no other chance to eliminate the irregularities and impurities left in the sliver in further process of yarn manufacturing.

Two actions are taken place in draw frame process.
One is doubling and other one is drafting.
Doubling process helps to improve the evenness of sliver and drafting helps to achieve the maximum parallelisation of fibre along the sliver length and reduce the linear density of sliver too.

In the process of doubling, two or more carded slivers are taken and they are fed together.
After drawing process a combined sliver of same linear density is obtained.
Mostly 6 or 8 slivers are combined together in doubling process and single sliver is produced.
The resulting sliver has improved uniformity and linear density.
How the evenness of sliver is improved during doubling? It can be understand by law of doubling. 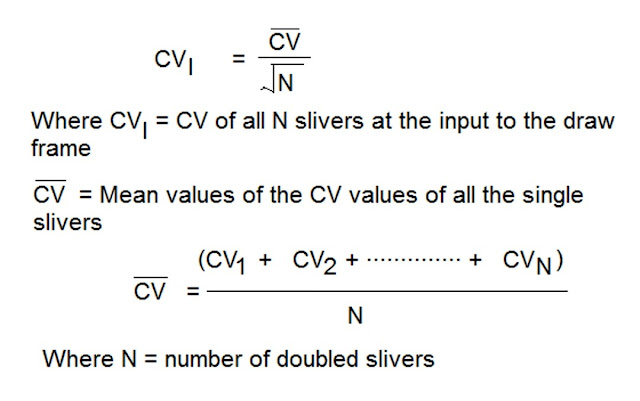 Above equation shows when the value of N increases, the value of CVI decreases. Therefore, doubling process always reduces the overall irregularity of carded sliver.

The main objectives of draw frame process are given below:

• To improve the uniformity (linear density) of sliver up to optimum level.

• To straighten the hooked, curled and crimped fibres present in the sliver.

• To draft the material and to reduce the weight per unit length of sliver.

• To mix or blend the components of sliver to each other and to find homogeneous material output.

• To eliminate the dust and impurities present in the sliver.

Objectives of roving or simplex frame