This is a yarn package defect. This defect gets occurred during yarn winding process. 'The patterning or ribbon formation (Ribboning ) can be defined as a yarn package defect to be occurring during yarn winding process, in which the yarn coils get laid on the top of the previous yarn coil'.
In other words, we can say that the yarn coils follow similar path repeatedly during winding. This repeatedly continuous yarn coils path causes patterning or Ribboning ( ribbon formation) in the yarn package getting wound.

This situation gets created when traverse ratio reaches to an integer value. It has been observed that some patterning also occurs when values of traverse ratios that differ from an integer by 0.5, 0.25 etc.

This kind of patterning results at the starting of winding. Since the rate of change of package diameter gets very fast at the time of starting, so that the patterning persist for very short period.

This anti-patterning device has been designed and developed by Schlafhorst. It is a cradle anti-patterning system. As we know patterning creates when the number of yarn coils laid on the package per double traverse is a whole number. At the time of ribbon formation, the ratio between traverse drum speed and package speed reaches a critical value. The The computer of the "propack system" continuously monitors the speed of traverse drum and package speed and determines the ratios between traverse drum speed and package rotational speed. Whenever computer reads that critical speed ratio is about to touch patterning zone, the propack system comes into action immediately. The propack system lowers the cradle pressure by a pre-determined amount. In this way, the rotational speed of the package also gets decreased below the critical patterning speed till the package diameter gets adjusted to a value above the pattern zone. After crossing the patterning zone, the propack system system again send a command to mechanism, and the cradle pressure immediately returns in it previous value.

The Muratec Mach(Japan) has developed this anti-patterning device. This is an electronic device. It works on the basis of semi-conductor. Anti-patterning action is achieved with the help of pre-feeding of programme for start and stop durations (period) of the traverse drum motor. In this way, the speed variation cycle gets adjusted. The speed of traverse drum and therefore, the package increases or decreases constantly to prevent the ratios of their speeds to touch the critical value which creates patterning.

This anti-patterning system has been developed by Murata ( Japan). This anti patterning system is known as Pac21.  This monitor all those critical parameters which are cause patterning. When control unit of Pac21 reads that patterning zone is about to touch, it sends a command to change the position of yarn from one groove to another groove of the same drum to prevent the patterning. In this way, at the time of ribbon formation zones the groove position changing mechanism switch over the yarn from winding at 2W to 2.5W.  It is suitable for all counts, types of yarns and package shapes.

This anti-patterning device has been developed by Savio. It is an electronic device. The drum and package diameter ratio gets read and regulated with the help of a computerized system. Each winding head computer controls the yarn deposited on the package. When the system reads that the patterning zone is about to touch, it  automatically intervenes with a servomotor to modify the drive ratio between package and the drum. The Savio claims that this system produces perfect package without patterning.

Knotting and splicing in winding process

Ballooning in the winding process, causes, and remedies

You may also be interested in below sponsored links:
at March 25, 2020
Email ThisBlogThis!Share to TwitterShare to FacebookShare to Pinterest
Labels: anti patterning device, patterning, ribbon formation, Ribboning 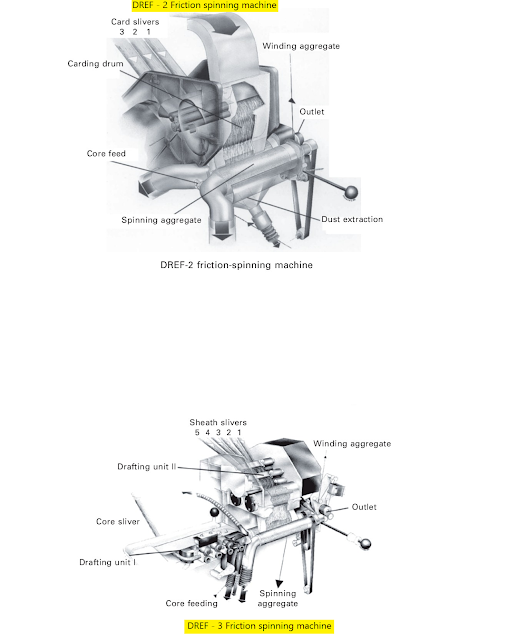