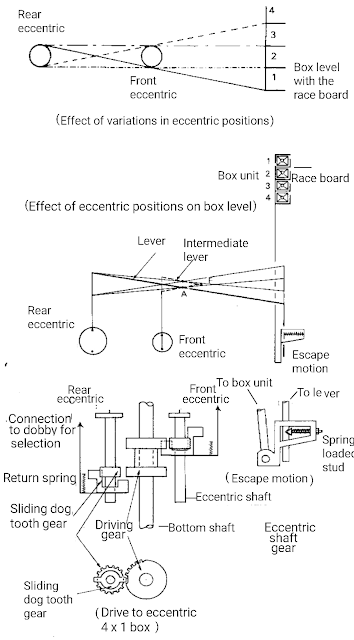 The spring-loaded stud remains engaged with a cut out on the box unit support shaft to drive the boxes up and down. If the shuttle is projecting from the box so that full movement of the box unit is not possible. In this situation, the catch will be forced out of the cut-out that the drive mechanism will make it a full movement but box unit movement will be limited and damage avoided.

If rear and front both the eccentrics go in their up positions, then the second shuttle box gets levelled with the race board.

If rear and front both eccentric come in the down position, the third shuttle box gets leveled with race board.

PLEASE WATCH BELOW VIDEO IN HINDI ABOUT STRUCTURE AND WORKING OF CROMPTON AND  KNOWEL'S DROP BOX MOTION: