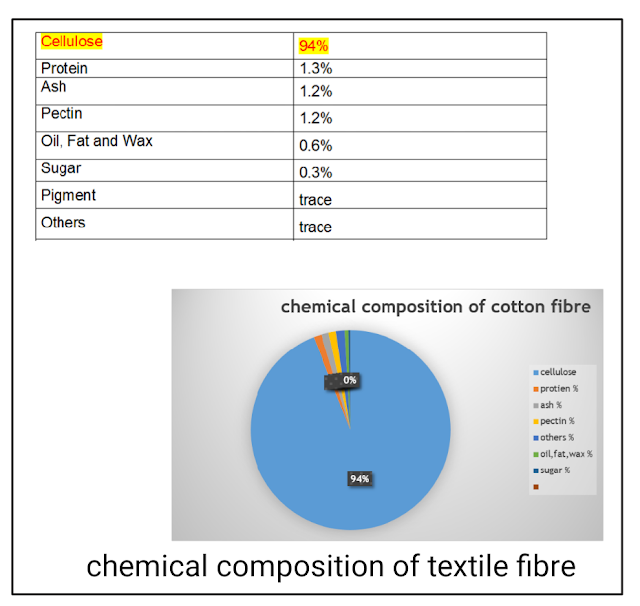 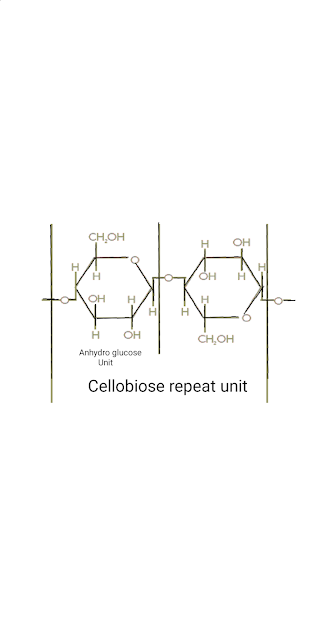 Cellulose Chemistry
After scouring and bleaching, cotton has near about 99% cellulose. Cellulose is a macromolecule. It is a polymer made up of a long chain of glucose molecules linked by C-1 to C-4 oxygen bridges with the elimination of water (glycoside bonds). The anhydroglucose units are linked together as beta-cellobiose; therefore, anhydrous-beta-cellobiose is the repeating unit of the polymer chain. “The number of repeat units linked together to form the cellulose polymer is referred to as the degree of polymerization”.
Wood pulp, rayon and cellophane (all three re-generated from wood cellulose) are also composed of cellulose polymers. “Cotton cellulose differs from wood cellulose primarily by having a higher degree of polymerization and crystallinity”. Crystallinity indicates that the fibre molecules are closely packed and parallel to one another.

Chemical structure of cotton
The cellulose chains within cotton fibres tend to be held in place by hydrogen bonding. These hydrogen bonds occur between the hydroxyl groups of adjacent molecules and are most prevalent between the parallel, closely packed molecules in the crystalline areas of the fibre.
The three hydroxyl groups, one primary and two secondary, in each repeating cellobiose unit of cellulose are chemically reactive. These groups can undergo substitution reactions in procedures designed to modify the cellulose fibres or in the application of dyes and finishes for crosslinking. The hydroxyl groups also serve as principal sorption sites for water molecules. “Directly sorbed water is firmly chemisorbed on the cellulosic hydroxyl groups by hydrogen bonding”.
“The strength of cotton generally increases with increased moisture. This difference among fibres in their response to moisture is explained in terms of intermolecular hydrogen bonding between cellulose chains and their degree of crystallinity.”
Thermoplastic fibres melt at elevated temperatures and have a glass transition temperature at some point below the polymer’s melting point. “At the glass transition temperature, a thermoplastic fibre becomes brittle and loses its elasticity”. Cotton is not a thermoplastic fibre; therefore, it has no glass transition temperature and remains flexible even at very low temperatures. At elevated temperatures, cotton decomposes instead of melting. Long exposure to dry heat above 300°F (149°C) causes cotton fibres to decompose gradually, and temperatures above 475°F (246°C) cause rapid deterioration. 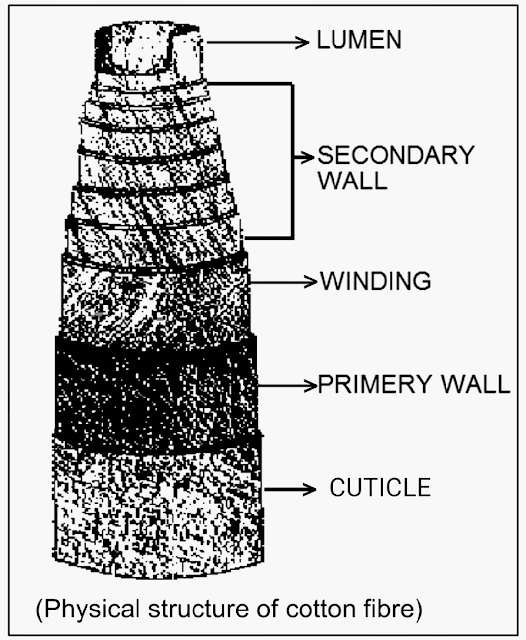 • The “cuticle” is the outer waxy layer, which contains pectins and proteinaceous materials. It serves as a smooth, water-resistant coating, which protects the fibre. This layer is removed from the fibre by scouring.
• The “primary wall” is the original thin cell wall. Mainly cellulose is made up of a network of fine fibrils (small strands of cellulose). This makes for a well-organized system of continuous, very fine capillaries. It is well known that fine capillaries rob liquids from coarse capillaries. “The fine surface capillaries of each cotton fibre contribute greatly to cotton’s wipe-dry performance”.
• The “winding layer” (also called the S1 layer) is the first layer of secondary thickening. It differs in structure from both the primary wall and the remainder of the secondary wall. “It consists of fibrils aligned at 40 to 70-degree angles to the fibre axis in an open netting type of pattern”.
• The “secondary wall” (also called the S2 layer) consists of concentric layers of cellulose, “which constitute the main portion of the cotton fibre”. After the fibre has attained its maximum diameter, new layers of cellulose are added to form the secondary wall. The fibrils are deposited at 70 to 80-degree angles to the fibre axis, reversing the angle at points along the length of the fibre. The fibrils are packed close together, again, forming small capillaries.
• The “lumen wall” (also called the S3 layer) separates the secondary wall from the lumen and appears to be more resistant to certain reagents than the secondary wall layers.

Mature cotton fibre has the following six parts.
The “lumen” is the hollow canal that runs the length of the fibre. It is filled with living protoplast during the growth period. After the fibre matures and the boll opens, the protoplast dries up, and the lumen naturally collapses, leaving a central void, or pore space, in each fibre.
The figure shows a schematic structure of the mature cotton fibre, identifying its six parts.
Throughout the fibre structure, there are variously sized pores or capillary spaces between the variously sized fibrils in each of the six fibre parts. Thus, the cotton fibre can be viewed as a microscopic physical sponge with a complex porous structure. This internal structure makes cotton fibres accessible to liquids and vapours. The capillary action of the fibrils pulls liquid in, where it is held in pores between the fibrils. This structure accounts for cotton’s wickability and unique absorbing capacity.
The cotton fibre, when observed in its entirety, is a flat, twisted ribbon, with 50 to 100 convolutions per inch. The fibre is tapered on one end and fibrillated on the other, where it was joined to the cottonseed. This provides the fibre with a soft
touch or feel, because it has no sharply cut ends, as do synthetic staple fibres.
Please click on the below video link to watch the full article in Hindi: