DRAWING - IN PROCESS, A WEAVING PROCESS 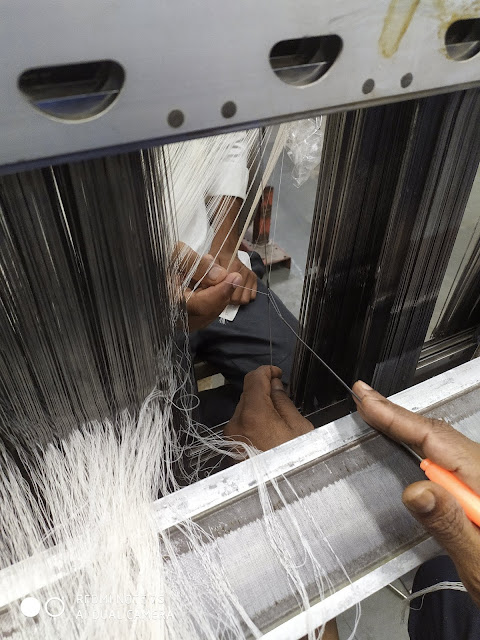 “A process of passing the end through the eye of heald wire or harness according to the draft (sequence of drafting the ends) is called drafting”. When the drafting is performed manually, two persons do this job. The person who selects the ends and presents them for drawing is called the reacher. The person who draws the ends through the eye of heald wire with the help of a drawing hook is called a drawer. 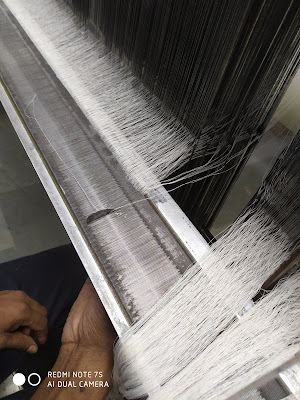 There is two methods of drafting which are given below:

This method is performed manually. It is a too time-consuming process in the drawing-in process. Highly skilled persons are needed to perform this task. The required number of heald shafts are prepared. The heald wires are inserted into each heald shaft according to the total number of ends present in the weaver’s beam. These heald shafts are hung on the stand. Now weaver’s beam is put just behind the stand.  Each end of the barrel of the weaver’s beam rests on the two bearings fitted on the small iron stand. These bearing stands helps to rotate the weaver’s beam in any direction. Now the warp sheet passes over the aluminium pipe fitted across the full width of the drawing stand. If the beam is prepared on the sectional warping machine, it has the ends separation lease. The reacher clears the ends with the help of a dressing brush. If sized weaver’s beam is used, there is needed to fix the ends on their place with the help of half reed of suitable count. Before hanging the warp on the aluminium pipe, one or two layers of the warp sheet are unwound. Now the ends of the warp sheet are fixed with the help of gum tape. The half-metre length of the warp sheet is unwound again and another gum tape is put. Now half reed is inserted in the warp sheet between the two gum tapes fixed earlier on the warp sheet. This half reed is tied with the drawing stand. This half reed prevents changing the position ends in the warp sheet and end crossing in the sheet. Now reacher selects the end according to lease or half reed and presents it in front of the eye of the heald wire selected by the drawer. The drawer inserts the drawing hook into the eye of the heald wire and the reacher puts the selected end in the hook. When the drawer pulls the hook, the end also comes with a drawing hook, thus the end is drawn through the eye of heald wire. This action is repeated again and again till the completion of the drafting of the full warp sheet. When the drafting is completed, the end is passed through dents of reed. When one person does this process, he first selects the end, then inserts the denting stripe into the dent, then put the selected end into the slot of denting stripe. Now he grips the stripe with the help of his left hand under the reed and pulls the stripe. Thus end is passed through the dent of reed. This action is repeated till the completion of denting of the full warp beam.

Please click on the below video link to watch the full article in Hindi:
at October 18, 2019
Email ThisBlogThis!Share to TwitterShare to FacebookShare to Pinterest
Labels: denting, drafting, drawing - in process, drop wire, heald eye, heald wire, what is drawing in in weaving