The manufacturing of polylactide completes in following steps: 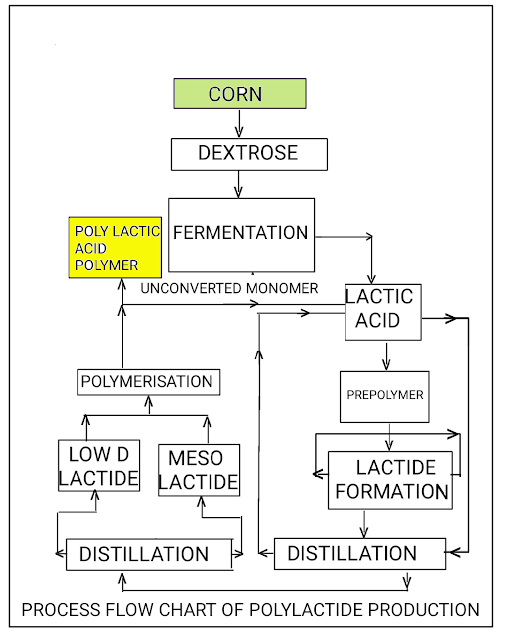 Polymerisation:
The polylactide fires are produced by using following method:

This reaction is carried out in solution of tin octoate in the melt or suspension. The metal-catalyzed reaction tends to cause racemization of the polylactic acid, reducing its stereoregularity compared to the starting material.

Another method of producing polylactic acid  is the direct condensation of lactic acid monomers.

The condensation reaction is carried out at less than temperature 200 °C, because the entropically favoured lactide monomer is formed above that temperature. During  this reaction, “one equivalent of water for every condensation (esterification) step is formed”. This  is not desired because water causes chain-transfer leading to low molecular weight material. Due to above reason, the direct condensation is carried out in different steps. First of all  lactic  acid is oligomerized to polylactic acid oligomers.

After this polycondensation is carried out in the melt or as a solution, “where short oligomeric units are linked to give a high molecular weight polymer strand”. Water generated in during this reaction is  removed by using vacuum  or azeotropic distillation, which is crucial to favour  polycondensation over transesterification. Even higher molecular weights can be attained by carefully crystallizing the crude polymer from the melt. Carboxylic acid and alcohol end groups are thus concentrated in the amorphous region of the solid polymer, and so they can react.

Polylactide posses following important characteristics:
1 - Polylactide has degree of crystallinity of near about 37%.

2 - The glass transition temperature of polylactide ranges between 60°C - 65 °C.

6 - The polylactide is a biodegradable fibre.

8 - Flammability of polylactic acid or polylactide is low and smoke generation is also very low when it burns.

9 - It has high resistance to ultra violet  radiation.

10 - Due to low refraction index its colours look very rich.

• Tea or coffee  bags are made of polylactide.

• It has very significant medical uses(screws,pin,rods and mesh) because it breaks down within the body within six months to two years.