In the production of nylon 66 polymer adipic acid( six carbon atoms) and hexamethylenediamine (six carbon atoms) are used. During polymerisation the diamine (hexamethylene diamine) and the diacid (adipic acid) each donate 6 carbons to the polymer chain, therefore the polymer formed in this reaction is called nylon 66. As with other regular copolymers like polyesters and polyurethanes, the repeating unit consists of one of each monomer, so that they alternate in the chain. Since each monomer in this copolymer has the same reactive group on both ends, “the direction of the amide bond reverses between each monomer”.

Two-step melt spinning, comprised of spinning and drawing, is considered to be the conventional method to manufacture nylon filaments. After melting, filtering, and deaerating, the molten polymer is extruded through a spinneret into a chamber where the melt solidifies into a filament form.

When the molten polyester gets solid and gets converted into filament, it has little molecular orientation, and its slight birefringence is due to shear forces set up during extrusion. Desired orientation of the molecule and degree of crystallinity is improved by drawing the filaments. The newly formed filaments are drawn. Since the glass transition temperature of nylon 66 is less than room temperature so that, drawing of nylon 66 is possible in cold conditions. Hot drawing is also frequently used. Nylon 66 filaments are drawn approximately four times their original length. The elastic modulus increases significantly with increasing orientation. 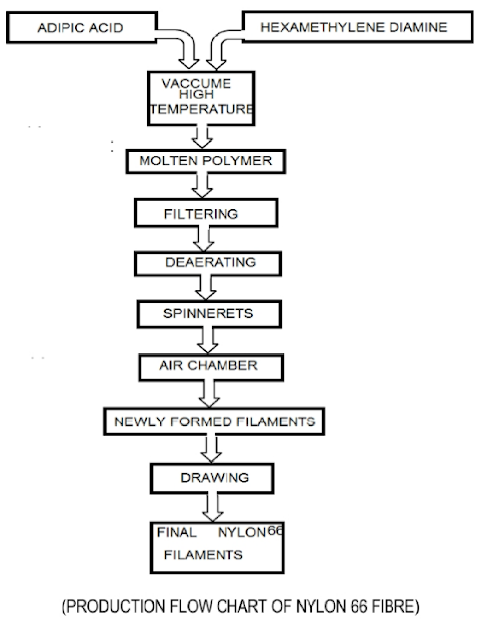 
Ring frame process and it's objectives