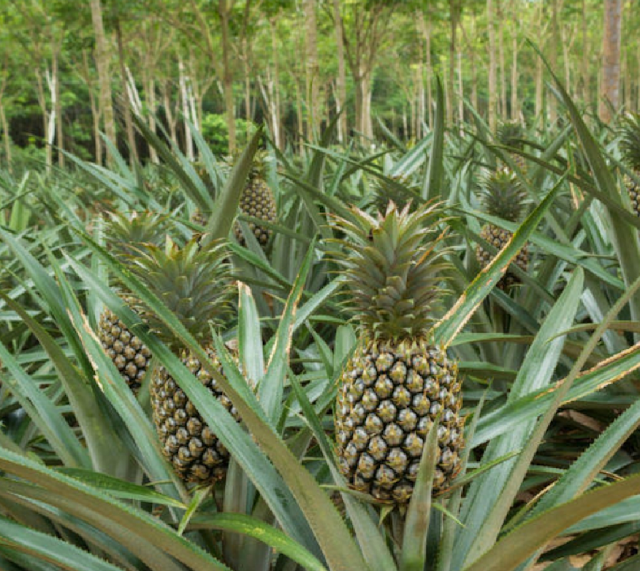 
These scraped fibres  are joined together by knotting one to another fibre. Thus a continuous length of Pina fibre gets obtained. Now these long filaments of Pina fibres get used to make Pina clothes. The pina cloth is woven manually. It is used to make table linens, bags, mats and other clothing items, or anytime that a lightweight, but stiff and sheer fabric is needed.

The Kalibo’s pina clothes were getting traded during the Pre-Hispanic times. It reached  as far as Greece and Egypt during its heyday.

People were aware about use of Pina fibres as textile from old age.  It got revived recently in last 20 - 25 years.
PRODUCTION OF PINA FIBRE:

The cultivation of pina fibre gets completed in below steps:

“The pina fibres are extracted from the pineapple leaves by hand scraping”, decortications or retting. While hand scraping, leaves are stripped by pulling or scraping the fibre away with tools such as porcelain plate, coconut shell, plastic comb and seashells. It is a much time consuming and labour intensive process.

The more refined processes include decortications. A motorized machine having scraping blade to remove the pulp in the leaves. The machine helps to separate the fibre from leaves. During the retting process, the pineapple leaves are immersed in water for some time. The bacterias present in water help  to soften the plant gums.

After extraction of fibres from pineapple leaves, the fibres bundles are left  in the open place for sun drying. The wax is applied to the  fibre surface now after drying of fibres. Now t he filaments are joined together by hand knotting.

These long continuous filaments are wound on the yarn package.

•Classification and Application of Pina Fibres

Red Spanish or native variety of pina is mainly used for hand weaving to make valuable items such as traditional Barong Tagalog, wedding for men, and blouses for women ,handkerchiefs, table linen, mats, fans, gowns and other clothing.

• They have beautiful elegant appearance with natural shine, similar to that of linen.

• The Pina fibres have the characteristic to blend with other fibres easily.

• These fibres have very soft feel.

• These fibres have improved texture in comparison of silk fibres

• The fabric made of Pina fibres poses good washability.

• They blend very efficiently with other fibers.

• They are very soft, even softer than hemp.

• They have better texture than silk.

• They can be washed and don't need to be dry clean.