The wrong end (fabric defect) appearing on the fabric surface due to wrong drafting of warp end through the heald eye of heald wire is called “wrong drawing”. 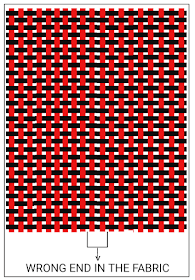 It appears vertically in the fabric. The main cause of this defect is a human error during drawing – in. Many times drawer misses the drawing sequence or skips draft by mistake. This mistake results in the wrong end (wrong drawing) on the fabric surface. Weaver should always check and verify the draft before starting the loom.

Now a question may arise in weaver’s mind, how can he make sure that there is not any wrong drawing in the fabric? There is very simple and effective way to check and verify the drawing mistake in the loom. First of all, raise the first heald shaft to keep remaining heald shaft in lowering position and check the drawing sequence of the first heald shaft. If there is any mistake, it can be seen and judged quickly and accurately. Now raise the next shaft, keep the remaining shaft in lowering position and check the sequence. This process is repeated for all heald shafts. Now weaver may be fully sure about wrong drawing.

The wrong drawing may also be generated while the loom is still in operation. How does it happen? The most of the time, this defect occurs due to weaver’s mistake during mending the broken end during weaving. If two adjacent end break at the same time, the weaver does not follow the drafting sequence properly. This weaver’s mistake results in wrong drawing in the fabric.

Another reason for wrong drawing during loom still in operation situation is the warp stop motion. If the loom stops late after warp breakage, the broken end is entangled with the adjacent end and is passed through the eye of heald wire without stopping the loom. This may also happen due to excessive hairiness in the warp yarn. This entangled end passes through the dent of the reed with an adjacent end. The weight of the drop pin should be chosen precisely according to the warp count. The improper selection of drop pins may be the cause of the late stop of loom after warp breakage. Weaver should always be aware of this situation.

The wrong end (fabric defect) appearing on the fabric surface due to wrong denting order of warp ends through the dent of the reed is called “wrong denting”. It appears vertically in the fabric. The main reason for this defect is a human error either during reed drawing or during mending of broken warp by loom operator. If the drawer misses or skips the denting order during drawing – in, it results wrong denting on the fabric surface. Loom operator’s mistake also results wrong denting in the fabric. Loom technician should make sure about the wrong denting just before starting the loom. The same procedure should be followed which has been adopted in the identification of wrong drawing. This defect may also be generated during loom still running position. The broken warp can be entangled and passed with adjacent end through the dent of the reed. The remedies of this problem are the same as wrong drawing.
Related articles:

Loose end in the fabric, a fabric defect

Missing weave or missing design in the fabric, a weaving defect

Reed mark in the fabric, a fabric defect

Bowing in the fabric, a fabric defect