This is an advanced and compact jacquard shedding mechanism in all mechanical jacquards. This jacquard has a large figuring capacity. This jacquard shedding mechanism has 1344 hooks figuring capacity. A long pattern chain can be used due to a lightweight plastic paper card. This jacquard can operate at high revolution per minute of the loom.
Structure of verdol jacquard or fine pitch jacquard shedding mechanism:
The double-acting hook is used in this mechanism. The hook has two incline bands on the upper end of the hook. These bands get inclined in the same direction. A notch is attached to the hook in the middle of the hook. There are sixteen rows of hooks used and one row contains 84 hooks. The hook rests upon the tug board when it reaches the down position. The upper end of the neck cord is passed through the hole of the tug board. The lower end of the neck cord is connected with the upper end of the harness cord. The lower end of the harness cord passes through the hole of the comber board and then gets connected to the upper end of the heald wire. The lower end of the heald wire is connected with reversing spring mounted on the springboard. The main needle having double eyes is used to control the selection of each hook. A pressure spring is mounted at the rear end of each double kink needle. This pressure needle tends to push the kink needle toward the pattern cylinder. Total sixteen double kink needles are used. The front end of each needle passes through the hole of the needle board. A pusher needle is mounted in front of a double kink needle. The pusher needle passes through the round eye of the dropper needle. A pressure spring is fitted at the upper end of each dropper needle. The lower end of the dropper needle passes through the hole of the needle plate. A pressure grid is mounted in front of the pushing end of the pusher needle. The pressure grid contains 16 pressure bars. A fixed perforated pattern cylinder is mounted just under the dropper needle plate. The pattern cylinder has a shaft on which peg wheels are mounted. The punched pattern card is mounted on the pattern cylinder. The punched paper card gets rotated with the help of peg wheels mounted on the cylinder shaft. A Geneva wheel is mounted at one end of the cylinder shaft. The Geneva wheel receives an intermittent rotatory motion through a crank mounted on the side shaft.
There are two griffes mounted on the jacquard shaft. Eccentric cams are used to impart reciprocating motion to the griffes. The sprocket wheel is mounted on the jacquard shaft which gets connected to a sprocket wheel having an equal number of teeth mounted on the bottom shaft of the loom through a chain. 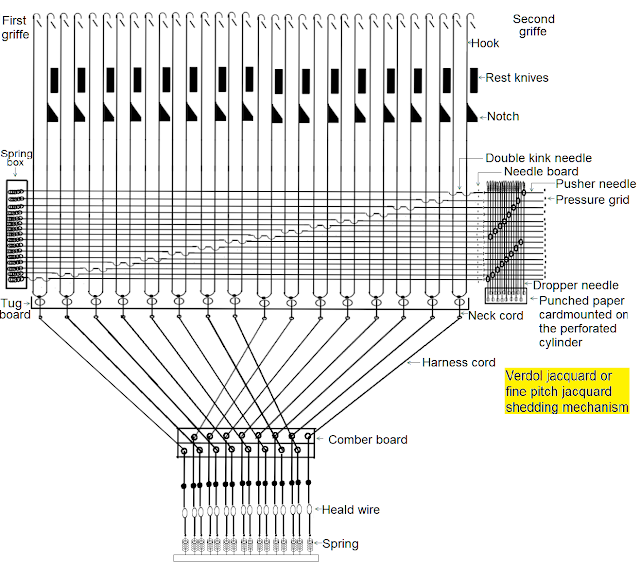 When the bottom shaft rotates, the jacquard shaft also rotates in the same direction. The rotating eccentric cams impart reciprocating motion to the griffes. When the first griffe reaches the bottom dead centre position, the second griffe goes to the top dead centre position. The positions of griffes get interchanged after the half revolution of the jacquard shaft. When the griffe reaches the bottom dead centre position, the top edges of the knives come slightly down from the upper band ends of the hook. Now the dropper needle presses the punched design card mounted on the perforated pattern cylinder. If there is a hole in the design card, the dropper needle gets entered into the hole of the pattern cylinder. The pusher needle position remains unchanged. The pushing end of the pushing needle comes in front of the open space present in the pressure grid. If there is no hole in the card, the dropper needle goes in an upward direction and the pushing end of the pushing needle engaged with the dropper needle goes in front of solid pressure bars. Now the pressure grid pushes the pusher needles. If the pusher needle gets pushed, the kink needle is also pushed and the hook engaged in the respective needle gets disengaged from the knives. If the pusher needle doesn't push by the pressure grid, the position of the pusher needle and kink needle remain unchanged and the respective hook gets engaged with a knife. The reciprocating griffe carries the engaged hooks in the upward direction.
When the first griffe reaches the top dead centre portion, the second griffe reaches its bottom dead centre portion. Now the selection of hooks takes place again.
If a hook needs to keep in up position two or more times it remains in up position and rests upon the rest knife. The notch of the hook gets engaged with the rest knife. When the pattern demands to bring down the hook, that hook gets disengaged from the rest knife.
Since the hook is connected to the Heald wire through the neck cord and harness cord so that the  Heald wire connected with respective hooks goes in the upward direction. In this way, shed formation takes place. The pressure spring mounted at the bottom end of the Heald wire brings the hook in a down position.
When the Jacquard makes one revolution, the pattern card changes its position two times. The pattern card is mounted on the peg wheels. When the Geneva wheel receives intermittent angular motion, it rotates the cylinder shaft. Since the peg wheels are mounted on the cylinder shaft so that the rotating peg wheels change the pick position of the card.

at March 29, 2021
Email ThisBlogThis!Share to TwitterShare to FacebookShare to Pinterest