The various types of textiles were found in 8000 BC in swiss lake dwelling. The dyed flax fibres have been found in the cave of Georgia, which belong to 3600BC.

The linen fibre was also used in the form of currency in ancient Egypt.

Today,  the linen is an very expensive textile fibre. It is four to five times more expensive than cotton. This fibre is produced in small quantity. The linen fibre has very good absorbency and durability. “Its durability, low specific gravity and breathability make it popular and ideal fibre for suiting and shirting”. Since the linen fibre has very low elongation and elasticity so that spinning and weaving of linen fibre is too difficult and more expensive than cotton. The linen yarn is spun by wet spinning method.

Chemical composition of flax fibre is given in below table: 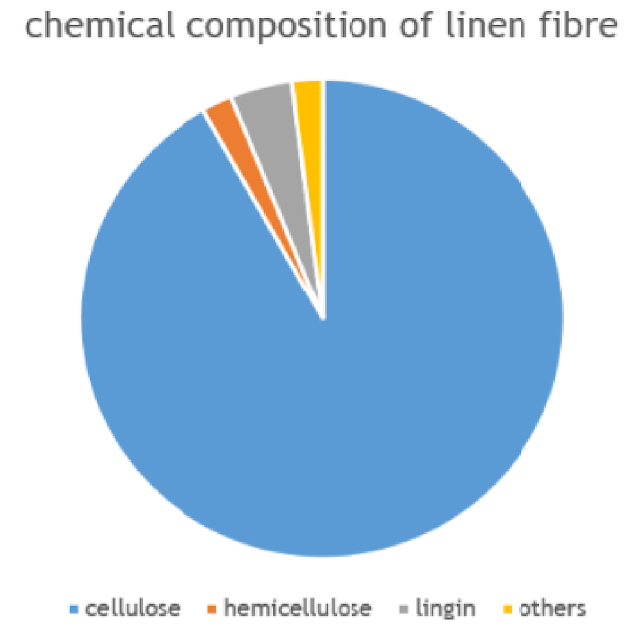 
Flax plant is grown in the warm and humid climatic conditions. It needs good soil to  grow properly. The quality of flax produced depends on the weather conditions in which it is grown. Flax plant can adapt itself to different whethers, various kinds of soils and atmosphere. The flax plant can grow in any humid climate. “Proper growing of flax plant demands a temperature, equable climate (free from heavy rain). The frost and moist winds help to grow the plant some time”. The relative humidity should be within the range of 60%-70% in flax growing area. 150m.m.-200m.m. rain is considered as ideal for flax growing areas.


The soil which is considered  as the best adapted to flax culture is a sound, dry , deep , friable loam ( a soil having sand, clay and fossils of dead plant) . This soil helps to produce the best quality flax fibres and seeds and maximizes the flax production in all respects.


Cultivated flax (Linum usitatissimum) is an  annual crop of  temperate ( neither very hot nor very cold) climates. It is specially grown in  northern  Europe. “Separate  varieties  are grown  either for the fibre or for the seeds that are used in linseed oil production”.
When the seeds are sown in the field. The flax plant height reaches to one metre approximately after 3 - 4 months. Now the pale blue colour flowers begin to appear on the stems of the plant. The whole plant is pulled from the soil after flowering. This practice helps to maximize the length of the flax fibres.


After pulling the stems from the ground, stems are collected in the field. In the traditional process, the pulled stems of flax plant are tied into bundles and are hung out to dry. When these stems get dried enough, these stems are combed with  a  rippling  rake  to remove  the seed pods. The stems are now ready for retting.

The retting is done  either  by  laying  the bundles in a damp field  for two  weeks approximately,  where they ret in the dew, or by leaving them in  stationary water ( pond) for a few days.
The retted stems are now washed and dried thoroughly again. These washed and dried flax stems are broken with the help of flax brake. The broken stems are now cleaned through scutching process.  The  fibres are then combed on hackles to produce long line fibres that can  be spun, called line flax. The short  fibres are eliminated after combing.  These short fibre are used to spin coarse count yarn.

“The process of loosening of the fibers from the stalk of the plant is known as retting process”. There are two types of retting method used. Such methods are:


The flax fibres bind together in the plant's stalk due to pectin present it. The loosening of fibres is required before fibres separation. In  this  method  of  natural retting,  the bacterias are used to  decompose  the  pectin. “Natural retting process is carried out in water tanks, pools, or directly in the fields”.  The stem's bundles  are left for  couple  of weeks in dew, pool  or  tank  in  contact  of  water.  After couple of weeks, the bacterias present in water decompose  the  pectin of the plant's stems and  fibres  are  loosened  from stalk. Now  bundles  are  taken out. Retted stems are washed with clean water and dried well before next process.


This method of retting is faster than natural retting, but “it is typically more harmful to the environment and to the fibres themselves”.

Physical properties of linen fibers are given below:


The inen fibre has very good tensile strength. It has a tenacity of 5.5 to 6.5 grams/denier. This is greater than cotton fibre.


The linen fibre shows very poor elongation. It  does not get elongated easily. It has an elongation of 2.7% - 3.5% at break. The low elongation characteristic creates much problems in spinning and weaving.

Lusture or seen of linen fibre:

The lustre ( seen) of the linen fibre looks brighter than cotton fibre and it has slightly silky appearance.

Specific gravity of linen fibre is 1.50 grams/cc. This is lighter than cotton.


The linen fibre has very good resistance to degradation by heat. It gets less affected than cotton fibre by the heat.


The linen fibre do not get affected by the sun light as others fibre. It has enough ability to protect sun light.


The linen is a natural cellulosic fibre. The chemical properties of the linen fibre are given below:


Linen fibre shows a very goodresistance to alkalis. It remains completely unaffected when it comes in contact with strong alkalis too.


The cold  chlorine and hypo-chlorine bleaching agent do not influence the linen fibre properties.


Linen fibre is affected by fungi and bacteria. Mildews can feed on linen fabric, rotting and weakling the materials. Mildews and bacteria will generate on linen under hot and humid conditions. The mildews generation can be prevented by treatment of material with antimicrobial agents.


Some common uses of linen fibre are being given below:

SOME FACTS ABOUT LINEN(FLAX) FIBRE:


- Linen  clothes shows high air permeability  and provides good air ventilation to the skin which is invaluable  for people suffering from skin diseases.

- The possibility of ironing linen fabrics with a hot iron helps to obtain a high degree of elimination ( less than 40 per cent of  the micto- bacterias remains on the surface).
- The flax fibre has a high electrical conductivity, this characteristic helps to prevent electrostatic charge accumulation.
conductivity

- The high electrical conductivity of flax fibre helps to prevent dirt and dust contamination in it. This characteristic helps to reduce the washing frequency of the fabric. Thus the life of the fabric gets increased.

- The linen fibre has great moisture content. Flax fibers show highly hydroscopic nature. They can absorb moisture rapidly (up to 20 per cent of its dry weight) without feeling damp. The linen cloth always gives fresh feel and cool touch.

- The linen fabric has good strength and durability.

- The liinen is the most strongest fibre among the vegetable fibers. This is 2 to 3 times more strong than cotton.

- The fibres do not get elongated and are resistant to damage from abrasion.

- The linen fabrics have very good dimensional stability after washing.

at August 11, 2019
Email ThisBlogThis!Share to TwitterShare to FacebookShare to Pinterest