- The weave or design is created in the woven fabric by a shedding mechanism.
- If a loom is equipped with a tappet shedding mechanism then the - lifting plan of the heald shaft gets fixed.
- The number of picks and ends per repeat gets limited in the tappet shedding mechanism. These limitations don't allow us to create bigger motifs.
- If the loom is equipped with dobby shedding, the weaving of small geometrical motifs is possible because the dobby mechanism has the capability to operate up to 28 heald shafts in different lifting modes.
- The weave or design having a large number of picks per repeat can be woven on a dobby loom.
- If the design repeat has more number of ends per repeat than the number of jack levers present in the dobby then we can not produce this kind of larger design.
- The jacquard shedding has the capability to operate a large number of ends in different lifting modes.
- We can produce the larger floral, ornamental, and geometrical woven designs by using jacquard shedding.
- The lifting of the individual end gets controlled in jacquard.
structure of single lift and single cylinder jacquard:
- The knives are mounted on the griffe. The griffe makes up and down movements.
- The lower end of hooks rests upon the grate.
- A needle is engaged with each hook through the eye of a needle.
- The front end of the needle passes through the hole of the needle board.
- A pressure spring is fitted at the rear end of the needle. The - pressure spring always pushes the needle toward the cylinder.
- The pattern cylinder is mounted in front of the needle board. A star wheel is mounted at one side of the pattern cylinder.
- The punched card chain is mounted over the pattern cylinder.
- The lower end of each hook is connected with the upper end of the neck cord.
- Now the neck cord passes through the holes of the tug board mounted just under the hooks.
- An s-link gets connected at the lower end of neck cord.
- The s-link is connected with the upper end of the harness cord. This harness cord passes through the hole of the comber board mounted on the loom.
- The lower end of the harness cord is connected with the upper end of the heald wire. The lower end of the heald wire gets connected with the lingo.
- The jacquard receives rotatory motion through a crank shaft. the sprocket wheels and chain are used for motion transfer. 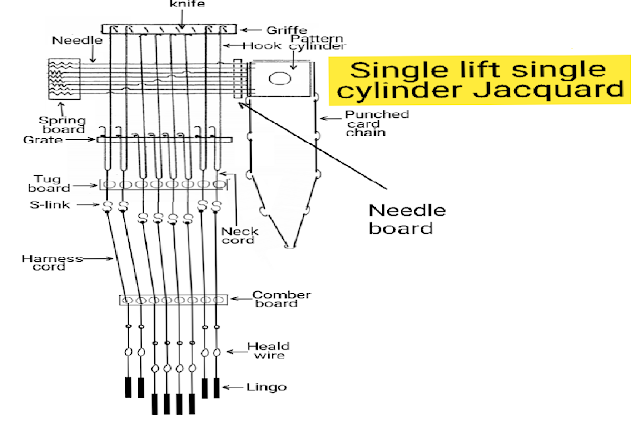 - The jacquard shaft receives motion through sprocket wheels mounted on the crank shaft.
- The crank shaft and jacquard shafts are connected through a sprocket wheel chain.
- The eccentric cams are used to provide upward and downward movement to the griffe.
- The griffe make one cycle of up and down movement when the crank shaft completes one revolution.
- The knife mounted on the griffe comes slightly down in comparison to the upper end of a hook. This position is also called the selection position.
- Tow the punched card mounted over the pattern cylinder pushes the front end of the needle.
- The blank portion of the card deflects the hook away from the knife.
- If there is a hole in the card, the needle gets entered into the hole of the perforated cylinder and the needle does not deflect the hook away from the knife.
- In this situation, the hook rests just over the knife. Thus the hooks get engaged with a knife.
- Now the lifting griffe carry the engaged hook in the upward direction.
- Since the hook gets connected to the heald wire through the neck cord, and harness cord so that the end drawn in the heald eye of the heald wire lifts upward with the hook.
- The lingo ( dead weight) attached with the lower end of the heald wire brings the heald wire in the downward position.

at March 23, 2021
Email ThisBlogThis!Share to TwitterShare to FacebookShare to Pinterest 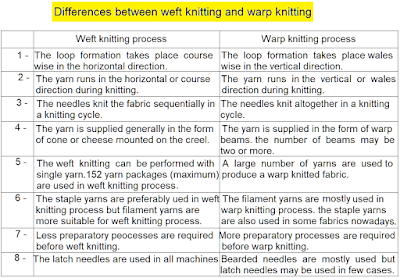