Picking motion is a primary motion which comes after shedding motion. When the shed gets almost opened, the pick ( weft yarn is inserted into the shed from one selvedge to other selvedge. The fabric weaving is not possible without picking motion. There many kind of picking motions are used to weave a fabric. 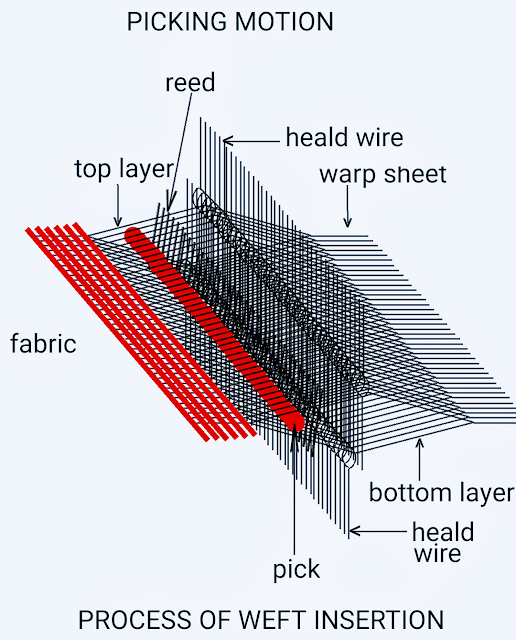 1 - The pick is inserted through shed by hands in frame weaving.

2 - The pick is inserted into the shed by hitting the shuttle carrying weft bobbin in handloom weaving.

3 - In the power loom weaving, the pick is inserted into the shed mechanical hitting of shuttle carrying weft yarn. The power loom is operated by electricity.

4 - In shuttle less picking, the picking motion is performed through non conventional mechanism.

There are following kinds of picking motions used to weave a fabric:

The picking mechanism which has not any kind of control over the journey of weft yarn till the end of picking motion. Power loom and handloom, airjet loom, water jet loom picking are the examples of negative picking. In this kind of picking, there is no control over the weft carrier or weft yarn after throwing them. The shuttle can fly out from the shed too.

Reasons for end breakages in ring frame process: Ring frame is a final process where the desired count of yarn is produced. The end breakage...