The weft fork motion stops the loom when the pick gets absent in the warp shed. If this motion is mounted at one side of the loom, then this motion performs its work at every alternative pick. There is always a possibility of missing two picks in the fabric and these missing picks create either dense marks or crack during restarting of the loom.
The centre weft fork motion is mounted at either middle of the race board or nearly the middle of the race board. This mechanism stops the loom immediately if the weft breakage occurs mechanism doesn't wait for the next round of loom. Thus this mechanism helps to improve the quality of the fabric. 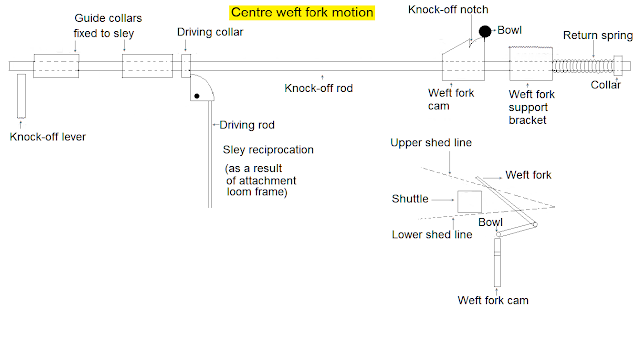 If weft yarn gets absent in the shed the prongs of the weft fork fall in the cut out of the sley and the bowl gets trapped in the knock-off notch and limits the distance that the knock-off rod can move to the right. A small length of knock-off rod is now protruding from the left side of the guide collar.  As sley moves toward the beating position, the protruding portion of the knock-off rod strikes with a projection from the starting handle and knocks off the loom. the loom is stopped before the beating position.
Please click on the below video link to watch the full topic in Hindi: